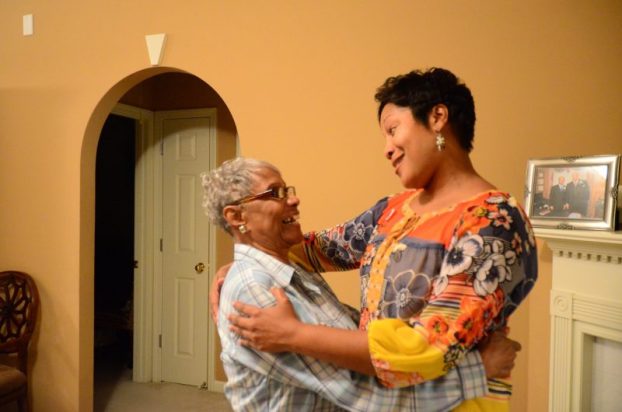 Scott won a second term at Place 2 on the Pelham City Council by defeating retired Fire Department Battalion Chief Don Green 807 votes to 700 votes, which represents 53.5 percent of the votes. 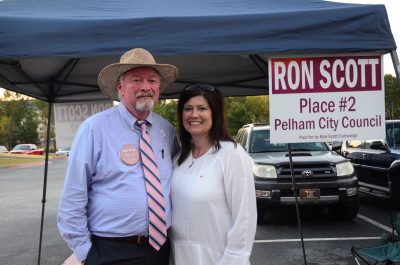 Ron Scott and his fiancé Sarah Walker stood outside of the Pelham Civic Complex talking to voters on the day of the runoff election, Tuesday, Oct. 4. (Reporter photo/Briana Harris)

“I am so thankful and grateful to the people of Pelham for having faith in me as a councilman, and I’m appreciative of the endorsements from Mayor Gary Waters and my former opponent Tommy Johnson,” Scott said.

In the next four years Scott said he will continue to put an emphasis on retail development and growing and enhancing Pelham City Schools.

Lanier said she was ecstatic when she received the news of her win.

Lanier said she considers it a blessing and a privilege to be elected to serve and it’s not a responsibility that she takes lightly.

“My heart is full of thanks,” she said.

Lanier said her plan entering the position is to work as a team with the existing City Council members to help move the city forward.

Rice, who served on the council for 32 years, said she will not seek re-election in four years. She said she is very proud of the progress the city has made during her time on the council.

“I’m very proud of the school system,” she said. “I’m happy we were able to do that, and I’ve always been a big supporter of our police and fire department. I’m sure they’ll continue to be great.”

The Pelham Civic Complex and Ice Arena was built 19 years ago and Rice said she’s proud of the progress that’s been made over the years.

“I’m thrilled to see them thrive and really come into their own,” she said.

Rice said her only regret is that she won’t be able to see some city projects through to completion.

“I do want to let the citizens of Pelham know that I’m thankful for their votes, support and effort over the years on my behalf.”

HOOVER – The final elected member of the new Hoover municipal government to take office at the beginning of November... read more