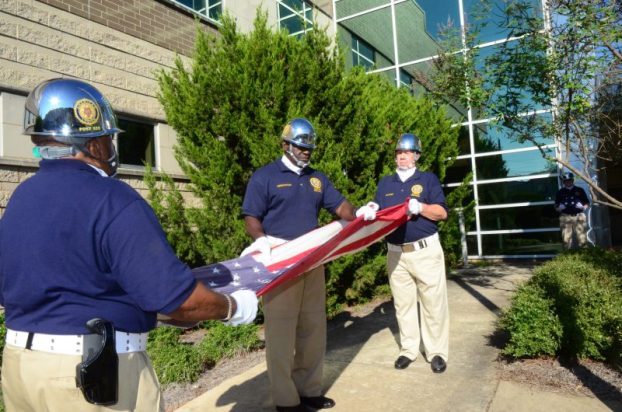 PELHAM – Members of American Legion Post 555, law enforcement officials and city leaders gathered outside of the Pelham Police Department Wednesday, Oct. 5, to retire the tattered U.S. flag flying in front of the building.

“The flag is not just a piece of cloth with stripes on it to me,” said First Vice Commander Tom McDaniel. “The flag is the nation’s symbol of freedom, so we’re paying respect to our flag and actually to our country. It has done its job and now, just like everybody will do one day, it’s time for it to retire.”

The flag was lowered and removed from the flag post during the playing of a bugle call, which is a short tune that was used to signal certain actions on the battlefield.

The men folded the flag and a bugle call played as they raised a new flag onto the flagpole. Once the flag was raised, the national anthem played.

This is the third flag retirement for Post 555 or Triple Nickel, as they are often called.

Retirement ceremonies are customary for national flags, which are those flown at public/municipality buildings. The flags are then burned during a ceremony usually performed by a Boy Scouts troop.

Police Chief Larry Palmer said the department’s flag gets worn out quickly because of their exposure to outside elements. He said a flag will last for about six months before it has to be replaced.

“I’m thankful to the Legion for providing this service,” Palmer said. “These guys are my heroes – they’re the ones who gave their time to serve our country and there’s a lot of sacrifice and loss of life that comes along with that.”

By AMALIA KORTRIGHT / For the Reporter HOOVER – Seva Beauty Salon celebrated its grand opening on Sept. 21 at... read more