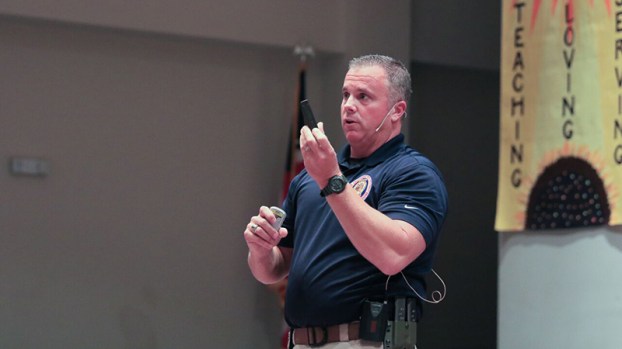 Helena Police Lt. Brad Flynn holds up a doorstopper to demonstrate how it can be used to barricade a door shut at an active shooter preparedness class at Helena United Methodist Church on Tuesday, Oct. 4. (For the Reporter/Dawn Harrison)

HELENA–If an active shooter situation were to occur, and you found yourself in the middle of it, would you know how to respond? More than 100 people attended an active shooter preparedness class on Tuesday, Oct. 4 at Helena United Methodist Church to gather tips and important information on how to act if faced with this ordeal.

Helena Police Department Lt. Brad Flynn has been a law enforcement officer for more than 23 years and has trained more than 1,000 officers across the state in active shooter response over the last three years.

“I wish we did not have to be here,” said Flynn. “I wish this was something that we didn’t have to fool with. Unfortunately, over the last 20 some odd years the world has changed and we have to change with it. We cannot control what happens both good and bad and as a result we’ve had some of the instances that have happened. This is something that is happening in greater frequency and unfortunately we can’t be there to prevent every active shooter event because if we could, we would.”

Flynn then emphasized the fact that although officers do try to respond to an incident as fast as possible, the fact is that they will not get there right away during an active shooter event.

“The reality of it is, the police may not be there in time to save the day,” said Flynn. “It may come down to you and a person with a gun. While I hope that no one in this room ever faces that, I hope that after tonight should you ever face that, you’ll have a few extra skills and options that you can use to hopefully survive that encounter.”

At the beginning of the class, Flynn showed a scene from the movie titled “Zero Day,” which showed an active shooter scenario and helped set the tone of the seriousness of these situations.

The class, which was geared toward anyone involved in church operations, saw a number of individuals in attendance from local area churches including Helena United Methodist Church, Christ Community Church, Shades Mountain Church, Prince of Peace, Hunter Street Baptist Church, Riverside Baptist Church and Church of the Highlands.

After the video, Flynn went over a number of slides depicting different techniques on what to do if caught in an active shooter scenario.

The correct order of response should be to look for an intelligent escape, barricade and hide and if there are no other means available, fight back.

When attempting to run away from an active shooter situation, Flynn said the main thing is to make an intelligent escape, meaning not running away wildly, avoid using elevators and escalators and leave all belongings behind.

The second option is to barricade and hide if running is not an option. Flynn said when hiding it’s important to be as quiet as possible, turn off all lights and silence cell phones as active shooters are “driven by sight and sound.” If possible, use anything in a room that could be used to barricade a door including tables, chairs and even using belts or other articles of clothing to secure a door handle.

The last resort should be to stand and fight back.

“This will probably be the most scared you will ever be in your life,” said Flynn. “But think of everything you have to live for. If it is your last resort don’t just let the shooter take your life because they don’t deserve that. Fight back by throwing objects or use anything as a weapon.”

When asked after the class what was one thing he learned that he previously did not know, Shelby County resident Drew Greer said it was the different methods to secure a door.

“I did not think about the different ways to secure a door,” said Greer. “Especially using a belt or a tie so I think that was my biggest takeaway.”

Usher also said the video played at the beginning “Made it more real and sobering.”

“This was not in the playbook when I became a police officer 23 years ago,” said Flynn. “As a matter of fact, if you would’ve told me the day I graduated the academy that I would one day be teaching active shooter class, number one I would say ‘what is an active shooter?’ and number two, once you told me I wouldn’t of believed you, but here we are.”

To find out more information on how to handle an active shooter situation, visit Alea.gov/Home/wfContent.aspx?PLH1=plhCitizens-ActiveShooter.