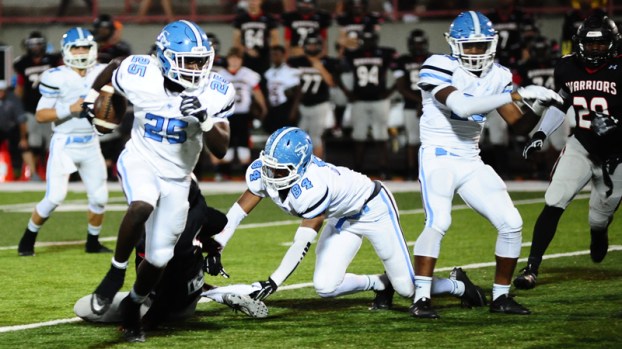 ALABASTER – A 95-plus-yard interception return for a touchdown and a 25-yard field goal allowed Spain Park to turn a halftime deficit into a 17-14 win at Thompson on Oct. 6.

The visiting Jaguars scored 10 of their points during a six-minute stretch of the third quarter and then hung on—including turning away the Warriors with no points when they had first-and-goal at the start of the fourth quarter.

The win improves Spain Park to 5-2 overall and 3-2 in Class 7A, Region 3 play, and will likely have playoff implications because four teams, including Thompson, had been knotted in the region standings.

SPHS, behind Hoover and Mountain Brook in the region, now appears in good shape for a postseason berth.

Thompson (4-3, 2-3), meanwhile, will likely need to win the remainder of its region games and have some help along the way, in the form of unexpected losses by a couple of teams ahead of it in the standings.

Thompson scored on its opening possession, with a 45-yard playaction pass from Josh Huner to Sam Holmes setting up a screen from Huner to Mo Edwards for a 17-yard touchdown.

Spain Park answered with a scoring drive of its own that was jumpstarted by Damarius Farmer’s kickoff return all the way to the Thompson 37-yard line.

Hunter Howell passed to Michaelanthony Allen in the flat, and Allen ran it in from 13 yards out to tie the score at 7-all.

Neither offense could find much traction after that. In fact, Thompson went almost two full quarters without picking up a first down, but the Warriors still managed to take the lead before halftime.

Christopher Lewis blocked a Spain Park punt, THS recovered and on the very next play, Holmes took a sweep around left end and found the corner of the end zone.

Logan Brown’s point-after made it 14-0 with 7:42 on the clock in the second quarter.

Thompson’s Arshon Willis intercepted Spain Park on its first possession of the second half and ran it all the way back to the visitors’ seven-yard line.

But with the Warriors set to take a commanding lead, Spain Park’s Farmer intercepted a Thompson pass at the goal line and ran it back almost 100 yards for a touchdown.

The Jaguars drove on their next possession for a 25-yard field goal by Cole Starr that would turn out to be the game-winner, giving SPHS its eighth consecutive win over the Warriors and a 9-2 edge in the all-time series.

Both teams ended the game with different quarterbacks than the ones who started.

Thompson reserve Caleb Ragland led a drive inside Spain Park’s 10-yard line early in the fourth quarter, but two penalties on the offense stalled the momentum.

After a pass in the end zone was broken up by Spain Park’s Braxton Hall, a 31-yard field goal attempt to tie the game was no good.

THS took possession again with 3:01 on the clock, but defensive pressure from the Jaguars yielded three sacks, including two by Damon Wright.

“I’ve watched all these games with Hail Mary’s, and we said we weren’t going to be put in that position,” Spain Park coach Shawn Raney said. “You can cover them if you can sack them.”

Each team had two turnovers.

Raney said Barker was put into the game at a time the coach thought the offense “needed a spark.”

“We were trying anything we could to get going,” Raney said and added both quarterbacks would continue to see playing time.

Thompson’s Joseph Ford led all rushers with 93 yards on 12 carries, and Spain Park’s D’arie Johnson had 77 yards on 17 carries.