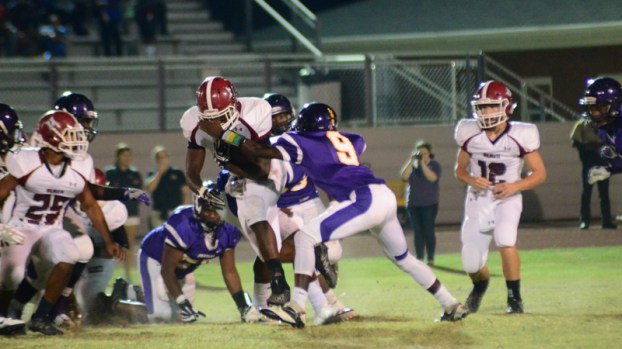 PLEASANT GROVE – The Shelby County Wildcats made the 50-minute trek north on Friday, Oct. 7 to take on the Pleasant Grove Spartans.

The Wildcats came into this game with a 1-3 record in Class 5A Region 5, while the Spartans came in with a 2-3 Region 5 record.

A loss by Moody tonight meant that a Shelby County win would have put them in the fourth place spot needed to make the playoff’s and a loss would mean their playoff hopes would end and the Spartans would all but seal up a spot in the post season.

It would turn out not to be the Wildcat’s night as they would fall in this one 34-14.

It was the fifth straight game Shelby County would fall behind early in a matchup and find themselves in a hole they couldn’t come back from.

Shelby County would go three and out on their first drive, which Pleasant Grove would take advantage of.

The Spartans would score three plays after the punt on a 46-yard play.

On the Wildcat’s second drive it looked like they had something going when senior running back Keyvonte Mayfield ran twice for a combined 15 yards, but on the third play of the drive he fumbled it on what looked to be a bad exchange.

Again, the Spartans would take advantage and score two plays later to go up 12-0 after a failed two-point conversion.

Shelby County came out with a purpose on their next drive, which saw some tough running early on and a 23-yard pass from junior quarterback Chadwyn Russ to running back Jeremiah Crenshaw.

The Wildcat’s would shoot themselves in the foot yet again with a false start penalty on the Spartan’s 38, which would lead to a Shelby County punt.

On the ensuing Pleasant Grove drive the Wildcat defense really stepped up and forced a three and out causing the Spartans to punt the ball away. On the punt Shelby County was called for roughing the kicker, which lead to a Spartans first down.

This obviously upset the Wildcats as they would buckle up and force them to punt the ball three plays later after Mayfield sack.

It seemed like this would be a big momentum shift in the game as Shelby County would come out and score on a nice quick 3:30 drive.

Mayfield led the drive with runs of 28 and 30 yards, before capping it off with a 10-yard touchdown run to cut the lead to 12-7.

This gave Mayfield 101 yards through the first 15 minutes of play.

The defense would step up for the second drive in a row and force another three and out, but the Shelby County offense wouldn’t be seen again until late in the fourth quarter.

Shelby County came out on their next drive and failed to convert on a fourth down and four from the Pleasant Grove 49-yard line.

The Spartans would get the ball back off the turnover on downs and score two plays later to go up 20-7.

They wouldn’t look back the rest of the night tacking on 14 more points to the Wildcat’s seven.

Shelby County would go three and out on their first four drives of the second half before they went on a 94-yard drive led by the running of Mayfield who broke off a 40-yard run and junior running back Austin Lucas who had a couple of good runs including the 5-yard touchdown leading to the final score of 34-14.

Mayfield accounted for more than 50 percent of the Wildcat’s offense running for 180 of their 275 yards and one of their two touchdowns on 27 carries.

Although the Wildcat’s playoff hopes have ended, they still have plenty to play for. Next Friday, Oct. 14, they will host the Briarwood Lions who will come in as the best team in Class 5A Region 5, boasting a 6-1 (5-0) record.

Briarwood hasn’t lost since their first game of the season at Chelsea meaning they have reeled off six consecutive wins heading into Friday’s matchup.

If there is a game that could get these players hyped up after such a tough loss it will be this one.

By NEAL WAGNER / Managing Editor NORTH SHELBY – Midway through the third quarter of Briarwood’s game against the Woodlawn... read more