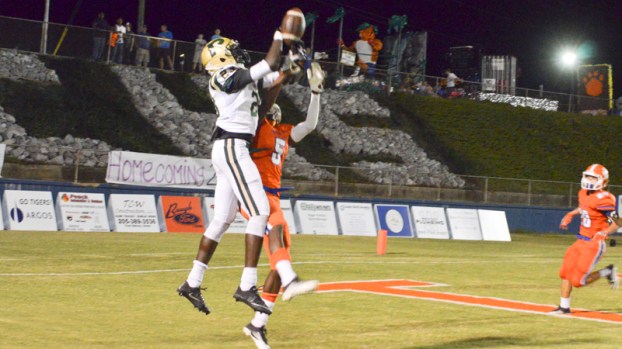 Keshawn Williams of Chilton County (No. 5) leaps and breaks up an opportunity for a Pelham touchdown pass. (Photo by Anthony Richards)

By Anthony Richards / For the Reporter

CLANTON – The Chilton County Tigers finally finished on the winning end of a close game after defeating region opponent Pelham 35-30 on homecoming.

The Tigers entered the game having lost four of its five games by 10 or less points, including three in region play.

However, that all changed on Friday night as Chilton County led 21-13 at the half and maintained the lead throughout the second half.

“It was another hard fought battle,” Bradford said. “The last couple of games that we lost taught us how to fight all the way to the end.”

Unlike in previous games, when Chilton County needed a drive the offense answered with a pair of demoralizing second half drives that gashed Pelham’s front seven as well as the clock.

“The offensive line came out strong and totally dominated the second half,” Bradford said. “We had two drives of six and eight minutes and that was the difference in the game. They’ve been the backbone for us all year.”

Both drives culminated with a touchdown, as completed a 6-yard strike to Keshawn Williams off of play action and later punched it in on a keeper from a yard out to put the Tigers up 35-23 with just over two minutes to play.

“It was either now or never,” Chilton County senior offensive lineman Damian Wilson said. “Everyone just focused on doing their job.”

Pelham moved the ball quickly through the air and scored, but Chilton County would not be denied and ran out the waning seconds.

The game started with a flurry of points, as Pelham scored on the first offensive snap of the contest, an 81-yard touchdown run on a quarterback read play.

“Nobody could hardly stop anybody, it was just one of those games,” Bradford said.

Chilton County answered with three first half touchdowns on a 12-yard touchdown pass to Keaton Sullivan on fourth down in the red zone, a 52-yard run by Davis and a 2-yard run by Cameron Wright.

Davis finished with 233 total yards of offense and four touchdowns, two through the air and two on the ground.

“It feels good to finally put it all together and finish as a team,” Wilson said.