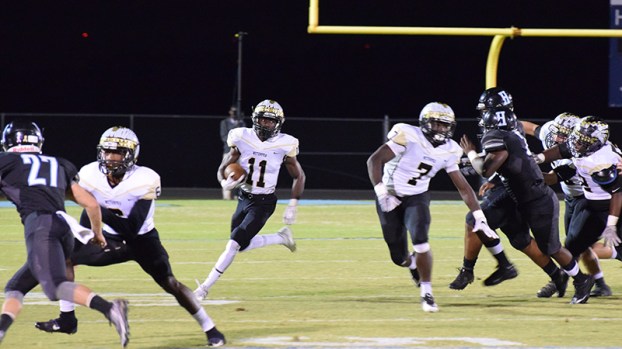 Wetumpka’s Maurice Young (11) looks for running room. The Indians held off a late fourth quarter surge from Helena to win 28-21 on Friday, Oct. 7. (For the Reporter/Brian Vansant)

HELENA–Despite scoring three fourth quarter touchdowns, the Helena offense couldn’t get things going the first 36 minutes of the game and a comeback bid fell short as Wetumpka held on to defeat Helena 28-21 at Husky Stadium on Friday, Oct. 7.

After three quarters, it looked as though the Indians would win going away as Wetumpka raced out to a 28-0 lead.

Less than 20 seconds into the second quarter the Indians got on the scoreboard again after Deandre Williams burst through the line for a 40-yard touchdown run to extend Wetumpka’s lead to 21-0.

The Indians tacked on another touchdown late in the third quarter and the final 12 minutes of the game are where things began to get interesting.

Down 28-0, Helena finally got on the board with 9:17 left in the game as Helena quarterback Riley Davis orchestrated a 10-play, 51-yard drive capped off with a 9-yard touchdown pass to Dionte Tolbert to make it 28-7. Davis returned from an injury that sidelined him the last two games and finished the game with two touchdowns.

A few possessions later, Helena found the end zone once again after Huskies running back Devan Walker scored from nine yards out to make it 28-14 with 3:01 left in the game.

Helena successfully converted an onside kick and on the first offensive play, Davis through a 49-yard touchdown pass to a wide open Jake Busby to cut Wetumpka’s lead to 28-21 with 2:46 remaining.

A second onside kick was unsuccessful and Wetumpka drove the ball to Helena’s goal line to run out the clock and preserve a win and halt a furious comeback by the Huskies.

After the game, Helena head coach Watt Parker said the first half struggles are what hurt Helena.

“We just couldn’t get anything going in the first half offensively,” said Parker. “Our defense started to figure it out and it took a little while to pick up speed in the game but I’m glad we fought hard until the end and we’ll see what we can do next week.”

With the loss, Helena dropped to 2-5 on the season and 1-3 in region play.

Wetumpka locked up a playoff spot with the win and improved to 7-1 on the season.