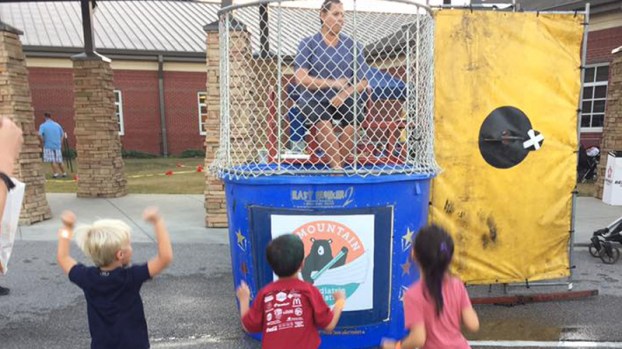 CHELSEA – The Chelsea Park Elementary School PTO hosted its Fall Festival on Friday, Oct. 7, which turns out to be the largest fundraiser the PTO puts on every year.

“It was a huge group effort,” said PTO President Lisa George. “Karen Epperson is one of the chairs of the Fall Festival and she put a lot of work into the event to make it so well organized. We also had parents volunteer, close to 40 volunteers from the high school came to work booths and pick up trash and the COP directed traffic.”

The festival featured several different rides, a dunk tank for kids to dunk teachers, concessions, sports games, a cake-walk, a photo booth, karaoke and much more.

“It takes a lot to put on an event this big,” George said. “We started planning for it during the summer and had to plan for several more rides this year than usual because it keeps growing.”

Not only did the PTO host the festival as part of the fundraiser, but they also hosted an online Fall Festival Silent Auction, which included prizes such as Disney World passes, a YETI Cooler and a $100 gift card to Ground Up Coffee and Smoothies.

“For the first time, we did our silent auction online and ended it the night before the festival,” George said. “That way people could come out and actually purchase their prizes during the festival.”

More than 1,000 people showed up for the event and after everything was said and done George estimated they made around $22,000.

That money will go toward more Chromebook’s for the classrooms.

“When they start the middle school they are supposed to be proficient with a Chromebook so we try to make sure at least every fifth grader has one, but want them in every classroom,” George said.

She went on to say how proud she was of the collaborative effort between the PTO board, parents and kid who made it such a successful event.

“We had a lot of support from the community, which just shows how much they support and care for our schools.”

The PTO’s next big event will be their annual coin drive the week of Jan. 9, which raised more than $10,000 last year.