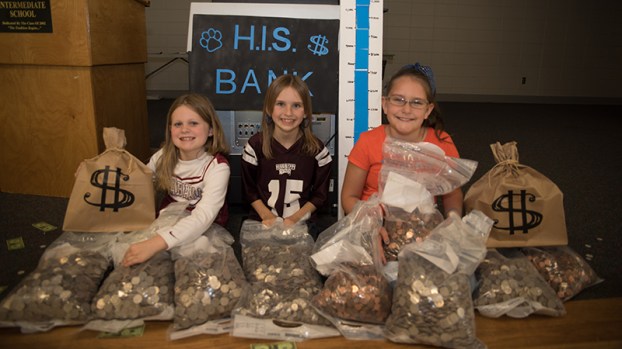 HIS collects $23,967 from coin drop fundraiser

HELENA–Change, change and more change. This was the scene at Helena Intermediate School the week of Oct. 3 for the second annual Coin Drop and Spirit Week fundraiser.

The largest fundraiser of the year for HIS had students, faculty and parents looking for loose change to help raise money to make improvements to the school, and all the participants delivered in a big way.

The fundraiser, titled “Barking for Bucks,” is a fundraiser that helps HIS make improvements to the school, as 100 percent of the funds raised go back to the school for various projects.

Remarkably, in just five days, HIS students and parents raised a grand total of $23,967 in the fundraiser, surpassing the target goal of $12,000 by a large margin.

“This was the second year for us to do the fundraiser,” said HIS Principal Kathy Paiml. “We are using the money this year to restripe our gym floor and add a paw print, put new floor mats at every entrance to the school and make upgrades to the playground and make other improvements.”

From Oct. 3 through Oct. 7, each day featured a different theme and classes who collected the most change, as well as the overall top individual all received various rewards.

On Monday, the theme was “Pennies for Power,” as teachers and students dressed like superheroes and collected as many pennies as possible.

Tuesday was “Nickels for Night,” as students and faculty dressed in pajamas.

Wednesday was “Dimes for Decades,” with a hippy, disco and grunge 80s theme.

Thursday was “Quarters for Quarterbacks,” as students sported their favorite team gear.

Lastly, Friday was “Barking for Bucks,” as students and teachers wore their favorite Helena Huskies gear.

Classes that collected the most money were rewarded by having a party at the end of each day with popcorn, chicken nuggets, donuts, hotdogs, cookies and more.

The grand prize for the individual that raised the most money will be taken to Top It Off Frozen Yogurt in Helena to celebrate.

FROM STAFF REPORTS HELENA–Five teachers at Helena Intermediate School have used the “Donors Choose” website to get projects funded for... read more