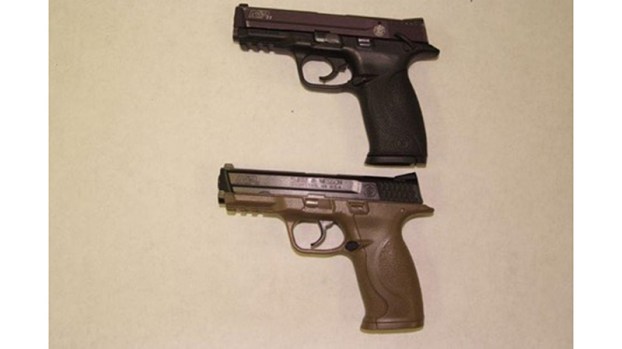 A 13-year-old Alabaster resident was arrested after allegedly brandishing a BB pistol (bottom) during an Oct. 10 robbery attempt. The BB gun is shown with an actual Smith and Wesson .22-caliber handgun (top) for comparison. (Contributed)

HOOVER – A 13-year-old Alabaster resident is being held in the Jefferson County Juvenile Detention Center after he was arrested and charged with allegedly trying to rob a victim with a BB gun in the parking lot of a Hoover store.

At about 5:30 p.m. on Oct. 10, the Hoover Police Department responded to a report of an armed robbery in the parking lot of Academy Sports in the 2800 block of John Hawkins Parkway.

When police arrived, the victim said he had been approached by a male suspect walking toward his vehicle in the parking lot while brandishing a pistol and demanding the victim’s property.

“After realizing the weapon was a BB pistol, the victim wrestled the gun away from the robber,” read a Hoover police press release, noting the BB pistol looked almost identical to an actual Smith and Wesson .22-caliber handgun. “The suspect then ran from the scene towards John Hawkins Parkway.”

An off-duty Hoover detective and an HPD patrol officer were in the area when the robbery call was dispatched, and apprehended the suspect shortly after he fled the scene.

Police have identified the suspect as a 13-year-old male from Alabaster, but have not released the suspect’s name because of his juvenile status.

By NEAL WAGNER / Managing Editor COLUMBIANA – A 19-year-old Helena man who is facing multiple rape charges from the... read more