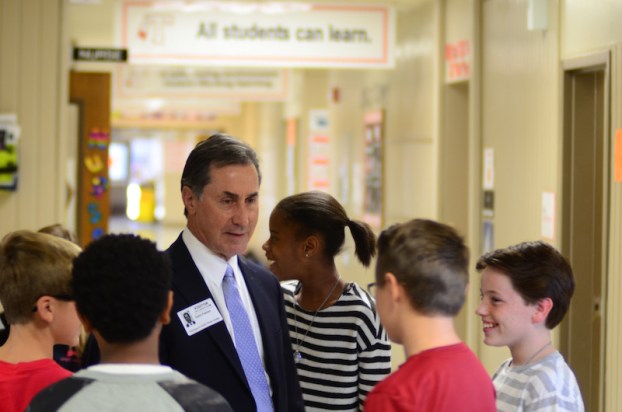 ALABASTER – U.S. Rep. Gary Palmer was greeted by members of the student government when he walked through the doors of the Thompson Sixth Grade Center on Tuesday, Oct. 11.

The congressman’s first order of business during his visit to the school was to introduce himself to each of these students and make sure to get their names.

Principal Daniel Steele, who was named secondary principal of the year for the 2015-2016 school year, proceeded to take Congressman Palmer on a tour of the school, showing him things such as the Wall of Dreams and the Kindness project that the school is working on.

It was obvious the Wall of Dreams was special to Palmer as he spent a little extra time reading the student’s dreams and telling a story.

The kindness project is another unique project upcoming at TSGC that struck the congressman as special.

This project will help to bring light to kids doing good things throughout the school. If a student is caught doing something kind they get a card with their name on it and get to redeem that for a ball, which they will then through in a big ball pit. The goal is to fill the pit with tons of different colored balls to show all of the acts of kindness each student has expended.

While standing there looking at some of the other projects, the students flooded the hallways passing by the congressman, several of which introduced themselves and one even came up and gave him a high five.

Once the kids settled into their next class, Steele took Palmer on a tour of the entire school and walked into each teacher’s classroom.

Almost every one of the classes had a student come up to introduce themselves and tell the congressman what the class was doing.

He saw all of the main curriculum classes, as well as an art class, a Spanish cultural class, band class and PE.

“The teachers are very engaging with their students here and are recognizing individuality,” Palmer said. “It showed with so many of the students coming up to me and wanting to shake my hand or introduce themselves, one even high fived me, which was great. That was nice and I was very impressed.”

In Linda Nalley’s Social Studies class, Palmer even told a story about Winston Churchill saying history is the most important aspect in life and told the kids how much fun they would have learning about it.

“I get to walk around and see the students and teachers working hard every day, but (Palmer) spends the majority of his time in Washington trying to pass laws,” Steele said. “We are just so grateful to have him and that he was willing to take time out of his busy schedule to stop by our school.”

Palmer said he decided to pay a visit to the school because Steele came up to Washington D.C., and told him about what he was doing at the Sixth Grade Center.

“It sounds candid to say school systems are the future of the country, but they are,” Palmer said. “This is an abnormal type of place, but sixth grade is an awkward time for a lot of kids, so it just makes sense to have a school dedicated to one grade to help make that transition to middle school so much easier. This really is a high quality learning environment.”

By NEAL WAGNER / Managing Editor HOOVER – A 13-year-old Alabaster resident is being held in the Jefferson County Juvenile... read more