County runners among fastest in state 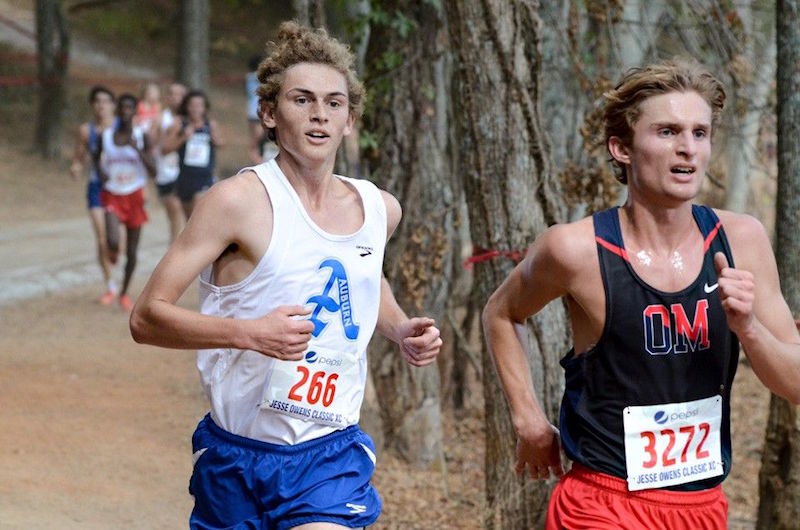 Oak Mountain’s Cole Stidfole, shown here in the Jesse Owens Classic on Oct. 1, currently has the fifth-fastest time in the state in the 2016 cross-country season. (Contributed)

The cross-country regular season is winding down, with roughly three weeks left before the sectional races. To this point a number of local teams have established themselves as some of the top teams in the state, and a number of individual runners have turned in impressive performances as well. Let’s take a quick look at where some of the top runners in the state stand leading into the Oct. 14 weekend.

The quickest time run by a county runner to date comes from defending Alabama Gatorade Runner of the Year Cole Stidfole. Stidfole, a senior at Oak Mountain, ran a 15:42.02 in the first meet of the season at the Early Bird Twilight Classic at the University of Montevallo, and has only run three more times since then to date. That time is also currently the fifth-fastest overall in the state this season. Stidfole’s teammate and classmate Caleb Van Geffen  ran a 15:53.24 in the Early Bird Twilight Classic, which is the second-fastest time in the county to date and the 12th-best time overall in the state thus far. Van Geffen has run in five meets since that time, but has been unable to eclipse the 16-minute mark again.

The only other boys’ county runner that has a time in the top 40 across the state to this point is Thompson sophomore phenom Brandon DeMarcus Lee. Lee ran a 15:58.50 at the Jesse Owens Classic on Oct. 1, which marked the first time the sophomore has ever broken 16 minutes in a timed race, and is the 16th-best time in the state overall to date.

There are only two county girls who currently have a time in the top 50 across the state, and both hail from Spain Park. Isabel Caddo ran a 19:14.60 at the Dew It On The Trails meet this past weekend, which is good enough for 22nd-best overall in the state, while teammate and classmate Mary Katherine Tedder’s 19:20.47 at the Early Bird Twilight Classic is the 27th-best time across the state to date as well. Tedder, a softball stud who is committed to the University of Texas, has come on strong for the Lady Jags in her senior year and become a lynchpin of that team. Caddo, in just her second year of competitive cross-country, has broken 20 minutes three times this far this season.

The 7A classification is widely regarded as the toughest cross-country classification, and with Oak Mountain and Spain Park running well, both could stir the pot in late November.

Jackson Hughes and the Montevallo defense will face its’ toughest test of the season this week against 3A No. 2... read more