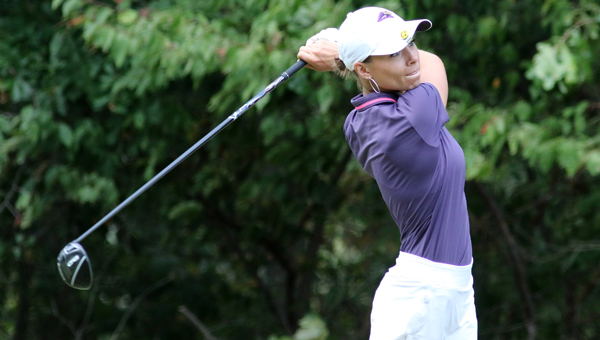 Montevallo’s Arin Eddy helped lead the Lady Falcons to a fourth-place finish at the Beall Fall Classic at the University of Findlay. (File)

FINDLAY, Ohio – The Montevallo women’s golf team finished in fourth place at the Beall Fall Classic that was hosted by the University of Findlay.

After starting the round in fifth place, the Falcons moved up a spot in the final round.  The Falcons shot a team score of 627 over the two round classic and finished 11 strokes behind the leader Missouri-St. Louis.  Montevallo shaved nine strokes off their first round score to shoot a 51-over for the tournament.

Arin Eddy finished the classic tied for second place with a 7-over 151 after shooting 73 and 78 in the first and second rounds.

Emily Romkey had a strong showing for the Falcons and finished in sixth place with a 9-over 153.  After shooting an 8-over par in the opening round, Romkey came back on day two and cut seven strokes off her day one score to shoot a 1-over 73. This is Romkey’s first top-10 finish this season.

Elaine Wood ended the classic with a 12-over 156 and finished tied for 11th place.

Kirstie Saltiel and Brooklyn Terry rounded out the field for the Falcons with Saltiel finishing tied for 38th and Terry tied for 50th.  Saltiel ended the classic with a 23-over 167 and Terry finished with a 26-over 170.

The Falcons are back on the course for the North Georgia Invitational that will be held in Dahlonega, Georgia on October 17-18.