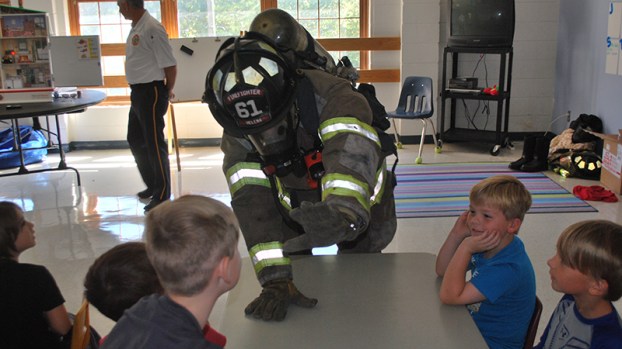 Throughout the week, members of the Helena Fire Department will visit Helena Elementary School and on Tuesday, Oct. 11, Helena Fire Deputy Chief Pete Valenti and Helena Firefighter Michael Lagrone helped first graders in Lidija Nikolic’s class understand what to do during a fire and how to avoid fires from starting.

Valenti began as a volunteer fireman in 1985 and started his career in 1989. In that time span, Valenti said the Helena Police Department has been doing the National Fire Prevention Week program since 1990.

“I think the best thing is just being able to educate the students and making sure they know about fire safety,” said Valenti.

During the presentation, Valenti gave the first graders fire safety information such as to always call 911 during an emergency, speak clearly when talking to a 911 operator, stay low to the ground if you’re in a room full of smoke, never run in a kitchen where cooking is taking place, smother a fire to avoid giving the fire oxygen allowing it to grow, stop, drop and roll if your clothing is on fire and more.

Another portion of the presentation included Lagrone putting on a full firefighter suit and gear to show the students what it looks like when the firefighters go in to fight a fire.

Valenti emphasized that it’s important for students to never hide from a firefighter if they are caught in a fire and to be visible so they can be seen.

In addition to giving tips, Valenti also used a visual aid to help students grasp a greater understanding of fire safety by using a miniature house that showed various rooms inside a residence.

The interactive house let out fake smoke, sounded a fire alarm, demonstrated how smoke rises, showed various ways to evacuate during a fire and more.

HIS collects $23,967 from coin drop fundraiser

By GRAHAM BROOKS / Staff Writer HELENA–Change, change and more change. This was the scene at Helena Intermediate School the... read more