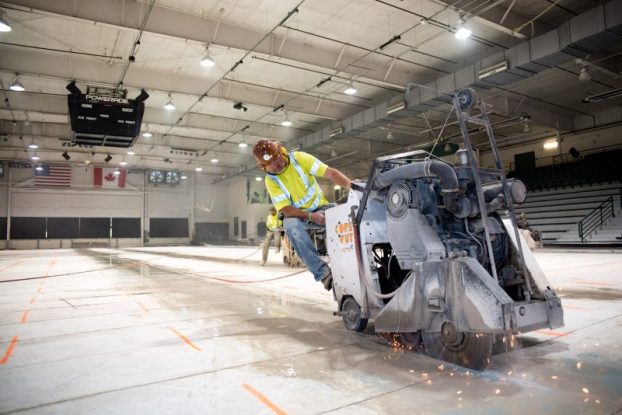 A worker cuts into the concrete slab that was under the ice in the main arena. The main ice rink must be demolished to fix a glycol leak. (Reporter photo/Keith McCoy)

PELHAM – The Pelham City Council unanimously voted to reject the bid for the repair of the main rink at the Ice Arena at a special called meeting Monday, Oct. 10.

The city is ripping out the entire main ice rink to fix a glycol leak underneath the ice.

Danny Tate, facilities manager of the Pelham Civic Complex and Ice Arena, said he originally thought the leak was located under the practice ice rink, but after conducting tests he learned the leak was under the main ice rink, which is 19 years old.

The rejection of the bid came at the recommendation of Tate. The only bid for the project, from All Star Arenas, came in at $480,000.

After researching material prices, Tate said he felt like the project could be completed for a lower price.

“I think we can negotiate a better price with All Star Arenas,” Tate said. “I know we can get concrete and a few other things at a lower cost.”

Tate said he has already had conversations with the company about negotiating a lower price, so there shouldn’t be a problem with getting it done.

The city estimated that replacing the ice rink would cost about $450,000. Tate said it would have cost the city about $150,000 to hire a company to demolish the rink, but by doing it themselves it cost about $75,000.

Tate said the demolition of the arena is ahead of schedule. He said the main arena has been completely removed down to the dirt and is ready for construction as soon a bid is approved.

The setback shouldn’t affect the timeline the city has for getting the project completed, said City Council President Rick Hayes.

The city still plans to have its tree lighting ceremony on Nov. 28, but it will be a little different this year. The tree lighting will be at the main arena, but the floor will not have ice on it. Residents will be able to ice-skate at the practice arena after the tree lighting.

Hayes said the goal is to have ice on the floor by mid-December because January is a big month for the Ice Arena with a lot of events planned throughout the month.

NORTH SHELBY – A public hearing is planned for Thursday, Oct. 13 to seek public input about a proposed extension... read more