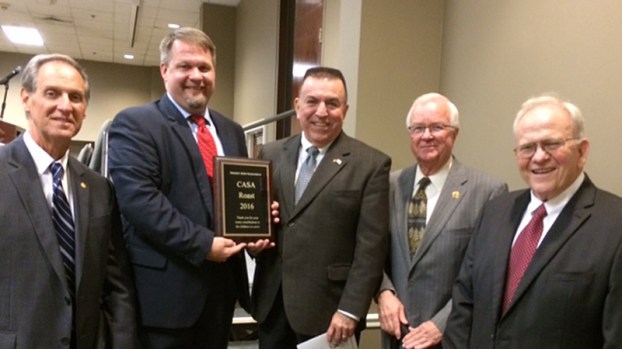 The Court Appointed Special Advocates of Shelby County roasted Sheriff John Samaniego on Thursday, Oct. 6 at the Pelham Civic Complex. The event raised $37,000 for CASA and provided an evening of G-rated humor for those who attended. What else would you expect at a sheriff’s roast?

Former Shelby County Sheriff Chris Curry came out of retirement to roast Samaniego, who served as his Chief Deputy for many years. Curry told of real-life situations they had been in together, one of which resulted in Curry looking under his car and being nose to nose with a pit bull. Samaniego thought that was funny since he was still in the car.

Former Pelham Chief of Police Tommy Thomas also roasted Samaniego giving some of those same stories. Thomas was introduced as Samaniego having referred to him as the Barney Fife of Pelham, but it was said that it couldn’t be repeated what Thomas said of him.

Last but never least was Butch Ellis to roast the sheriff. Butch used his vintage humor to take aim at the Sheriff and embarrass him a little, making fun of his name and likening it to a disease your Aunt Tilly might have or a local pizza restaurant.

Samaniego’s second in command, Chris George, was not in attendance at the roast but Ellis said he saw him outside making some “brake adjustments” to the sheriff’s car.

However, it was emcee Kevin Morris who had the most fun with Samaniego holding up photos beside him of Sergeant Carter from the old Gomer Pyle, USMC television show who looked just like him.

CASA is a non-profit organization whose goal is to prevent child abuse and neglect and to assist those who have been abused.  They recruit and train volunteers to go through the court process with abused and neglected children, advocating on their behalf. CASA Volunteers serve as a child’s “voice” in court.

They are funded in part by Shelby County, The Daniel Foundation, The Children’s Trust Fund and are members of United Way, National CASA Association and Alabama CASA Network.

To learn more about CASA and how you can become a volunteer, visit Casaofshelbycounty.org or call 980-4466.

By EMILY SPARACINO Thousands of miles away from home, Lauren Mashburn realized several years ago her eye for jewelry design... read more