CALERA – A 32-year-old Jemison man with a lengthy criminal history is facing up to 10 years in prison after police said he had a large amount of marijuana packaged for sale in Calera in early October, and was combative when Calera officers attempted to arrest him. 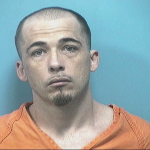 The Calera Police Department arrested Brian Michael Hudson, who lists an address on Chilton County 155 in Jemison, on Oct. 6 and charged him with a felony count of first-degree possession of marijuana and misdemeanor counts of possession of drug paraphernalia, attempting to elude officers and resisting arrest.

Hudson’s charges came after an incident in Calera on Oct. 6, during which a Calera officer attempted to stop Hudson’s vehicle. After attempting to flee the officer in his vehicle, Hudson was apprehended after a brief struggle, according to court documents.

While searching the suspect’s vehicle, officers allegedly discovered “several packages (of marijuana) for sale and a scale.”

Hudson was released from the Shelby County Jail on Oct. 10 after posting bonds totaling $103,500, according to jail records. His bond was set higher than normal because he has multiple previous drug convictions in Shelby County.

He has previous convictions for possession of marijuana, possession of a controlled substance, cruelty to animals, third-degree escape, driving while revoked, first-degree kidnapping, resisting arrest, attempt to elude, driving under the influence and several traffic offenses.

FROM STAFF REPORTS Attorney General Luther Strange is warning that people are receiving emails, purported to be from the Alabama... read more