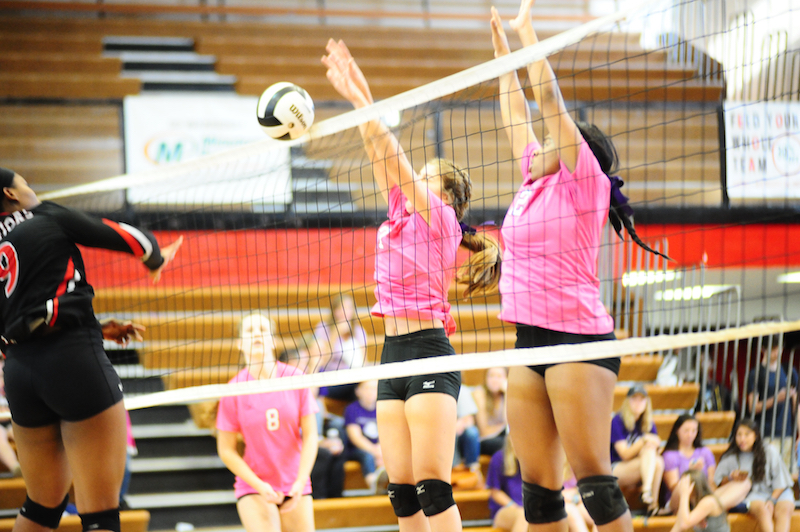 The Pelham Lady Panthers beat rival Thompson 3-1 on Oct. 13 in a match that helped raise awareness and money for the Jamie Kimble Foundation for Courage. (Reporter Photo / Baker Ellis)

ALABASTER – The Thompson volleyball Lady Warriors played host to rival Pelham on Oct. 13 in a match that was as noteworthy for what happened on the court as it was for what happened off it. The match took place at 1:30 in the afternoon on Thursday, and all the proceeds from ticket sales went to benefit the Jamie Kimble Foundation for Courage, which is a foundation dedicated toward creating a future without domestic violence. The Thompson gymnasium was packed with students from both schools, and the environment was one of the loudest and most enjoyable either team had seen to this point in the season.

“Number one I thought we handled the atmosphere of being in that situation very well,” Thompson head coach Judy Green said after the game. “I think we were nervous and a little scared, but what a great opportunity for our program. What I shared with the team was, ‘We’re going to get to the state tournament at some point and time, and we’re going to need to know how to play in that atmosphere,’ and today was the perfect, perfect set up for us to experience that for the first time.”

Pelham took the first set of the match 25-20 to take an early 1-0 lead, but Thompson came out firing in the second set, building an early 10-4 lead. The Lady Warriors eventually worked that lead all the way out to 23-14 before Pelham began to find new life. The Lady Panthers went on to win 10 of the next 11 points to tie the game up at 24-24 in a thrilling string of points, however Thompson was able to quell the comeback, and took the second set 26-24 to tie the match up at one set apiece.

“I think we struggled in serve-receive in that second set,” Pelham head volleyball coach Perry Robinson said after the game. “That’s what’s get you through to the end in volleyball, you’ve got to win that serve and pass game. We did a good job everywhere but that second set. I think we were a little nervous with the atmosphere, but I loved it. I told Coach Green that we’re happy to be a part of this, and I think it was a lot of fun.”

Coach Green and Thompson decided to dedicate this game to the Jamie Kimble Foundation for Courage after Green was approached by Thompson’s middle school volleyball coach with information on the foundation.

“A lot of volleyball programs in the month of October participate in the ‘Think Pink’ campaign for breast cancer awareness,” Green said. “But our eighth grade coach, Dory Hardy, and her husband coached Jamie Kimble in high school (in North Carolina). Dory brought the idea to me, and after doing some research and talking to Jan and Ron, it was just a wonderful opportunity.”

Jan and Ron Kimble, the founders of the Foundation, spoke to the students before the match. More information can be found on the Jamie Kimble Foundation for Courage online at Jkffc.org.

County runners among fastest in state