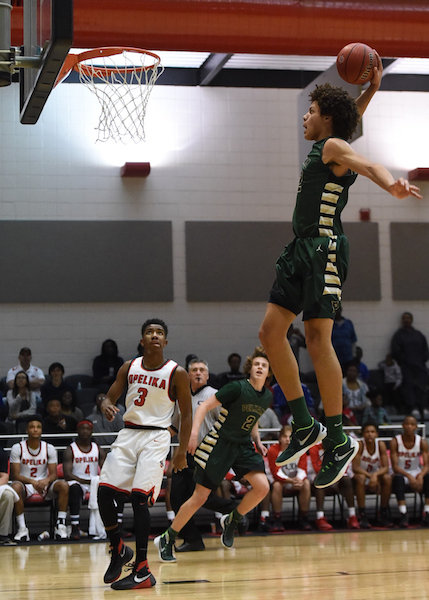 Pelham senior forward Alex Reese, shown here in a game in the 2015-16 season, has verbally committed to play his college basketball at the University of Alabama. (File)

PELHAM – Shelby County’s top basketball recruit in the 2017 class has made his college decision. Pelham big man Alex Reese, the 2015-16 Shelby County Co-Player of the Year and recent member of the US Select Team that took part in the 2016 Adidas Eurocamp, has committed to play basketball for Avery Johnson at the University of Alabama.

Reese, who had scholarship offers from a number of other schools, including a host of SEC schools such as Tennessee, Auburn, Georgia, Ole Miss, Vanderbilt and Mississippi State, announced his intention to attend Alabama via Twitter on Oct. 7, but had made up his mind before then.

“I actually (committed) on my official (visit),” Reese said, which took place on Oct. 1. “I just announced it Thursday.”

Reese’s decision is a culmination of four years worth of work from the Alabama basketball program, which had been recruiting Reese since his freshman year at Pelham. Then-head coach Anthony Grant gave him a scholarship offer after the first game of his sophomore season, and when Johnson arrived in April of 2015, Reese became an instant priority for the new staff.

As Reese continued to grow and accumulate offers throughout his sophomore and junior seasons, Alabama stayed in the hunt for the stretch power forward. After a long process, the final decision for the big man came down to Alabama or hometown UAB, and before he committed to Coach Johnson, very few people were sure which way he was leaning.

“I wasn’t surprised (by his decision), but I also didn’t know,” Pelham head basketball coach Joel Floyd said, in reference to his big man’s decision. “I told both UAB and Alabama there at the end, I said ‘He’s a great poker player,’ he kept his cards to himself and didn’t really share which direction he wanted to go. He let me know right before, but prior to that I didn’t have any idea. Him and probably his parents and his brother were really the only ones that had any idea until the end.”

Reese’s decision-making process undoubtedly was a complex and layered endeavor, but one of his primary motivating factors was the lure of playing SEC basketball.

“I think one of the biggest things was the competition I’ll be playing against,” Reese said. “It will help get me more prepared for the next level.”

Heading into his senior season, Reese stands right at 6-feet-9-inches (he’s closer to 6-11 with his mop of curly hair), and weighs 235 pounds. He hit roughly a five-inch growth spurt over the course of his sophomore year, and now has the ball-handling and shooting touch of a much smaller player coupled with impressive size and an ability to get tough buckets in the paint. That unique skillset is part of what has made him such a coveted recruit, and is what Alabama hopes to utilize at the collegiate level.

“(They want me to be) an inside-out four man,” Reese said. “So I can kind of take guys off the dribble if I need to.”

“I haven’t seen a kid like him here,” Floyd, who is entering his eighth season as Pelham’s head coach, said. “He has a special set of tools that don’t come around very often. He’s got the big size, touch down low, (he) can shoot it from three and handle the ball. I think the sky is the limit for him, and it’s completely up to him how far he wants to go with it.”

As a junior, Reese averaged 25.4 points per game, the most in the county, to go along with 10.9 rebounds, two blocks and an assist and a steal per game as well. He led Pelham to the school’s second-ever Sweet Sixteen appearance, and hopes to lead the Panthers to uncharted territory in his final prep season.

“I just want to lead my team to winning more games, and to get farther in the playoffs,” he said.

The Spain Park Jags, fresh off a tight win over Thompson on Oct. 6, moved back into the 7A ASWA... read more