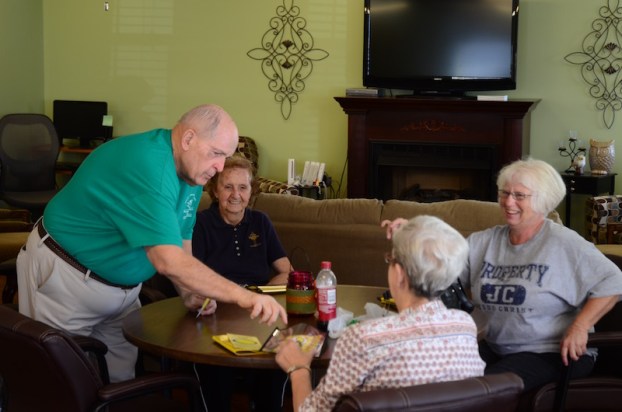 Marvin Copes explains how the Yellow Dot Program works to some of the ladies of Shelby Woods Apartments. (Reporter photo/Alec Etheredge)

COLUMBIANA – The Yellow Dot Program has been a staple to the safety of senior citizens since it was established.

Originally the program was only used in cars, but on Thursday, Oct. 13, they initiated a project to help senior citizens at home as well.

Yellow Dot Program is meant to help first responders by providing them with useful information on the citizen they are there to help, especially if they are unable to communicate.

“The whole idea is to give paramedics as much information about them as possible,” said Shelby County RSVP Coordinator Marvin Copes. “That first 60 minutes for the first responders is the most vital.”

Those first 60 minutes are known as the “Golden Hour,” and the yellow dot that the first responder sees is meant to help them during that time period.

The process of being part of the program is a pretty simple one and takes a matter of minutes. Participants have their picture taken, which will be placed in a yellow pamphlet along with a form they fill out with all of their vital medical information like blood type, medical conditions and emergency contacts.

“We have 4,500 individuals that are part of the program in this county alone, but today is the first time we’ve done it for apartments,” Copes said. “Getting it in apartments is a project that we have been working on for two years.”

Social Worker Katherine Martin said the reason it has taken so long to establish is because it’s something the residents have to volunteer for.

“It’s really important because staff isn’t always here to help,” Martin said. “If they are unable to talk with the first responder, this will help to give them the person’s critical information.”

The Yellow Dot Program is available in all to all ages across each of the 67 counties in Alabama. To view a list of enrollment locations you can visit http://adeca.alabama.gov/Divisions/lets/TrafficSafety/YellowDot/Pages/Locations.aspx#Shelby.

NORTH SHELBY – The Shelby County Sheriff’s Office along with multiple fire departments closed traffic to the entrance of a... read more