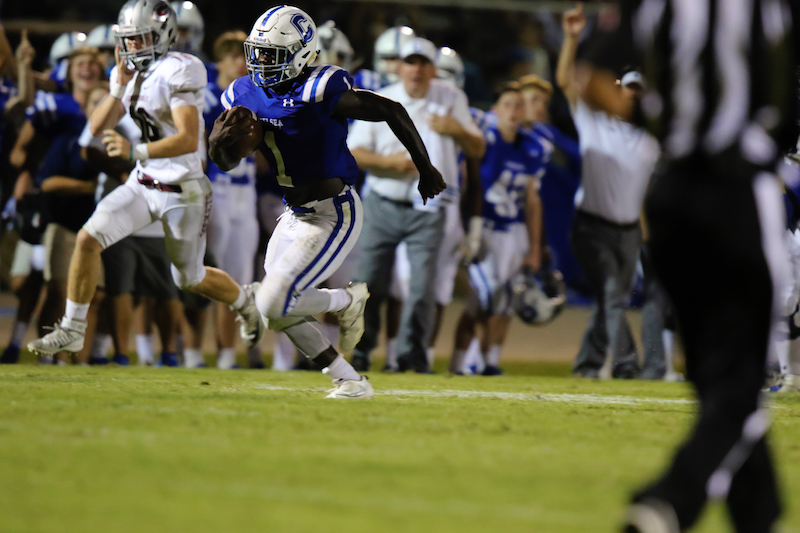 Zalon Reynolds rushed for three touchdowns, all of which came in the first half, as he helped lead Chelsea to a 63-35 win over Chilton County on Oct. 14. (File)

CHELSEA – Zalon Reynolds scored three first half touchdowns while Austin Stallworth added two more and Matt Marquet added one more as the Chelsea Hornets built a 41-28 halftime Homecoming lead over region opponent Chilton County on Friday night, Oct. 14. The Hornets went on to get an easy 63-35 win over the Tigers, scoring the second-most points in a game in Chris Elmore’s tenure. While the game ended with Chelsea getting nearly a 30-point Homecoming win, the first few minutes of this game played out in nightmarish fashion for the Hornets, as Chilton County built a 14-0 lead in the first minute of the game, and led 21-6 after three and a half minutes of action.

“I thought they made three really great catches early,” Elmore said after the game, in reference to Chilton County’s quick three scores. “I thought we had guys there, they just made phenomenal plays and runs after the catch. Next thing you know it’s 21-6. I was proud of our guys for not losing it, because it would have been easy to lose our composure there. But we kept telling them, there was literally like three minutes of game time gone, we kept telling them, ‘Let’s just stay the course, don’t panic’.”

Chelsea won the coin toss and deferred to the second half, giving Chilton County the ball first. The Tigers promptly took the opening kick, and senior quarterback Kendall Davis found classmate Keshawn Williams for a 75-yard touchdown pass, giving Chilton County a 7-0 lead 45 seconds into the game. Chilton County then implemented some trickery, trying a quick onside kick and getting the recovery around midfield. Davis then found senior wide out Keaton Sullivan on the first play of that drive for another score, and Chilton County had a 14-0 lead with more than 11 minutes still to play in the first quarter.

The Chelsea offense then went to work, and Reynolds soon punched his first touchdown of the night across the goal line just two minutes later. However, on Chilton County’s third possession of the night, Davis again struck quickly, this time connecting with junior wide receiver Patrick Rodgers for a 70-plus yard score to give the Tigers a 21-6 lead. Less than four minutes into the game, Davis was 3-for-3 throwing the ball for three touchdowns, all of which were over 50 yards.

After the early fireworks, Chelsea settled down and did what it does best, score points in bunches. The Hornets scored on each of their first half possessions, all on runs of 10 yards or less, and were in general completely dominant on the offensive end.

“What I’m really proud of was that when our tight end (Zach Adams) went out in one of the first series, we kind of had to change how we did everything offensively,” Elmore said. “A lot of the stuff we do with him was out, and we had to go to more of a true-four receiver set. I was proud of our offense for kind of adjusting on the fly and not panicking.”

Chelsea used a 10-play, 58 yard drive, capped by a 10-yard run from Reynolds to bring the score to 21-12, then used two quick scores, both from Stallworth, to take a 27-21 lead early in the second quarter at which point the Hornets never looked back.

After giving up the three big plays early, Elmore was happy with how his defense played and how they corralled Chilton County’s athletic quarterback and wide outs.

Chelsea had 10 full drives in the first three quarters and scored on nine of them, punting only once all night. Marquet scored on a six-yard scamper in the third before Stallworth added his third touchdown of the night, giving the Hornets eight-straight rushing touchdowns before Marquet found Jay Vickers for a five-yard touchdown pass late in the third quarter, which gave the Hornets a 63-28 lead.

The fourth quarter was left mostly to the second and third stringers, and Chilton County added a late, meaningless score to bring the final to 63-28.

Reynolds had 26 carries for 164 yards and three scores in the game, while Marquet had 15 carries for 111 yards and two scores and also threw for 139 yards on 11 completions as well as the Hornets racked up 500 total yards of offense.

With the win Chelsea moves to 6-2 (3-2) on the season and is now in a three-way tie for second place in 6A Region 3 with Benjamin Russell and Wetumpka. The Hornets wrap up region play next week with an important matchup with Helena.

The Helena Huskies traveled to Benjamin Russell High School on Oct. 14 and upset the Wildcats 35-24, keeping their playoff... read more