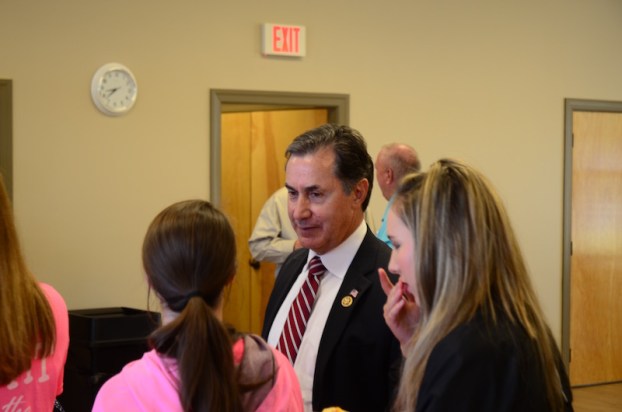 COLUMBIANA – U.S. Rep. Gary Palmer, R-Hoover, visited the Columbiana senior center on Friday, Oct. 14, to discuss several things that need to change within congress and his stance on the upcoming election.

One of the first items he spoke about was the Environmental Protection Agency and preventing them from overreaching.

He started by making the point that farmers will now need permits to plow their fields and finishing with them being able to regulate all greenhouse gasses.

“This is the kind of stuff I have been trying to take on,” Palmer said. “I introduced a bill known as H.R. 3880 or the Stopping EPA Overreach Act to prevent them from overreaching and abusing their power.”

Palmer, also on the Budget Committee, mentioned he is very concerned with getting a balanced budget and dealing with the $19.7 trillion of debt the country faces.

“Out of our annual budget, we’re paying about $250 billion just in interest on the debt,” he said.

He said projections show that in 20 or 30 years if we stay on the path we are on right now, debt will be 40 percent greater than our entire economy.

“I’ve been in public policy for 24 years and Congress another three years; the current tax reform proposal we have is the best one I have seen in my entire 27-year career,” he said. “It simplifies the tax code so most of us could fill out our tax return on one sheet of paper, and it lowers the corporate income tax rate from 35 percent, which is the highest in the world, to 20 percent.”

Palmer also said Alabama has a 6 percent state income tax, so for a business to come to this state they have to pay 41 percent corporate income taxes, which is why the U.S. is losing so many businesses to other countries.

“This will be one of the first things we introduce when we go back into session next year and if it is implemented it will immediately make our companies competitive internationally,” he said. “This will give us a major increase in manufacturing in our country, which is critical for job creation.”

After talking about how to improve the economy, he held a question and answer segment that many people took advantage of including Mayor Handley who led things off asking about unity in Congress.

“I think it’s better than a lot of people realize,” Palmer said. “I have actually had several democrats work with me on passing bills. Privately they have told me they cannot stand Nancy Pelosi, but she rules with an iron fist. A lot of them live in fear of Pelosi, so we are going to have to have some changes at the top.”

One of the biggest topics Palmer was asked about was the upcoming presidential election and who his support lies with.

“I’m hoping and praying that (Donald) Trump wins the election,” he said. “I’m not a Trump fan, he wasn’t even on my list of candidates, but what I’ve seen from the two tells me he’s the better candidate.”

Palmer said the main reason he believes this is because he has seen all of the bad Hillary Clinton has done.

As part of the Oversight Committee, he was in the secure area to look at emails from Clinton that were highly classified, saying he wasn’t even allowed to have a cell phone in the room.

“This is stuff that was going out on her private server through her unsecure communication devices,” Palmer said. “There are two laptops that had classified information that were in possession of people without security clearance. It’s not just extremely careless, it’s extremely dangerous because it exposes all of our intelligence assets all over the world.”

He also said there was another laptop missing along with a thumb drive that they said got lost in the mail. He looked at the AP government class in attendance and said, “That’s like one of these students going to their teacher and saying a dog ate my homework.”

“In my opinion, to make the changes we need to make in this country we are going to need a Republican in the White House,” Palmer said.  “Our choice comes down to two extremely bad candidates, but at the end of the day our choice is between a bad individual and someone who was the principal architect of a middle eastern policy that has resulted in the death of over 500,000 people.”