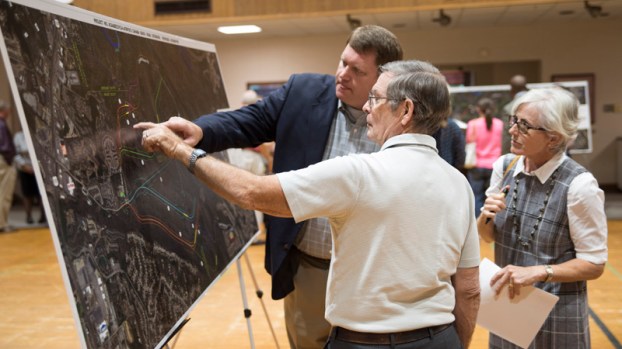 Shelby County resident Bill Touchstone looks over a map of proposed routes for an extended Cahaba Beach Road with Doug Peterson of Gonzalez-Strength & Associates Inc., which is serving as a consultant for the project. (Photos by Stephen Dawkins)

NORTH SHELBY – Though in its earliest stages, a project to extend Cahaba Beach Road in North Shelby County is sure to eventually have a significant impact on the area.

A public involvement meeting was held Oct. 13 at First Christian Church off Valleydale Road to explain the project and offer residents the opportunity to voice their opinions.

The project would extend the road from Swan Drive in Shelby County to Sicard Hollow Road in Jefferson County, including a bridge over Little Cahaba River near the Shelby-Jefferson county line.

Cahaba Beach Road, which on its southern end is an extension of Valleydale Road across U.S. 280, is paved to Swan Drive but then becomes a dirt road.

The road ends at Little Cahaba River at a bridge that has been closed since the 1990s.

The northern part of Cahaba Beach Road begins at Sicard Hollow Road and runs south to the river. 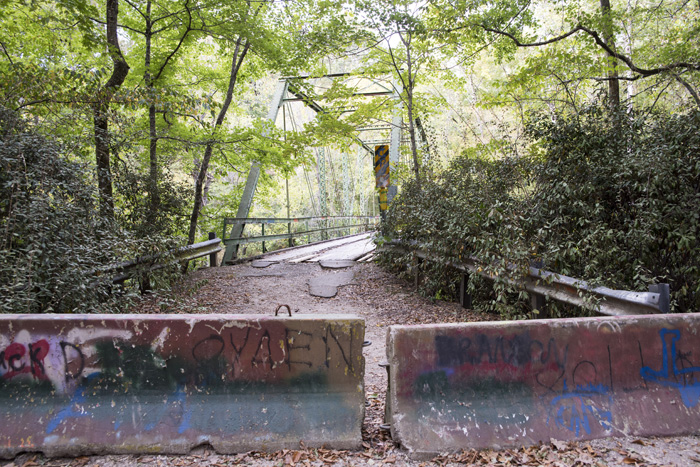 Cahaba Beach Road has been closed at a bridge over the Little Cahaba River since the 1990s.

Shelby County Commission Chairman Rick Shepherd said the purpose of the project would be to alleviate traffic on U.S. 280 by opening up another route.

“If there’s an accident on 280, people driving to downtown Birmingham are late for work,” Shepherd said.

Shelby County has partnered with Alabama Department of Transportation for engineering and environmental studies related to the project.

Numerous proposed alternatives for the road extension were presented at the meeting. Some followed the route of the existing road and included a new bridge near the existing bridge.

Other alternatives have the road running hundreds of feet away from the current route.

Information was provided at the meeting comparing the alternatives:

Some residents at the meeting agreed that the road extension could help with 280 traffic.

Bill Touchstone, who lives off Caldwell Mill Road, said he thinks the existing road should be used and the existing bridge should be devoted to canoeing enthusiasts and other recreational purposes.

Eugene A. Sample Jr., who lives in Cahaba Heights with his wife Norma Sample, said he is familiar with the area through his work in forestry.

“They needed an additional road, and this will take traffic off 280,” Eugene A. Sample Jr. said.

Gillespie carried a sign that read, “Spain Park High School students don’t want another cut-through,” and was signed by many of Gillespie’s students.

“If they put a road in there, it would very much disrupt an area we use for educational purposes,” Gillespie said, noting the abundant wildlife in the area.

Plans call for a bridge that would span Little Cahaba River and steps to be taken to prevent sediment from entering the river.

Still, Gillespie said the road would lead to fragmentation of the habitat enjoyed by a multitude of species, and further development in the area.

One of Gillespie’s students, SPHS senior Parker Wilson, agreed, saying his generation would be the ones forced to deal with any environmental problems caused by such projects.

“It’s kind of scary to see how people don’t care about the environment,” Wilson said.

Next step for the project

Following the public involvement meetings (a previous meeting was held Oct. 11 at Liberty Park Middle School in Vestavia Hills), alternatives to be studied further will be identified based on factors including engineering, economic and environmental considerations and input from the meetings.

“The public comments will help us determine the proposed alternatives we will further study,” said DeJarvis Leonard, East Central Region engineer for the Alabama Department of Transportation. “We encourage the public to provide input so we can make the best informed decision.”

Comment sheets were distributed to those attending the meeting, which allowed residents to record their opinion of the project, preferred alternatives and comments.

Any resident who wants their opinion to be part of the official record of the project can contact Leonard at: Attention Ms. Geneva Brown, East Central Region, Alabama Department of Transportation, 100 Corporate Parkway Suite 450, Hoover, AL 35242; or browng@dot.state.al.us.

Comments must be received by Oct. 24.

After a plan is approved by the Federal Highway Administration, a public hearing will be held to provide the public with an opportunity to see the results of environmental studies and provide additional input.

Leonard estimated the hearing could be held in the summer of 2017.

“We’re a few years away before you could see actual construction,” he said.