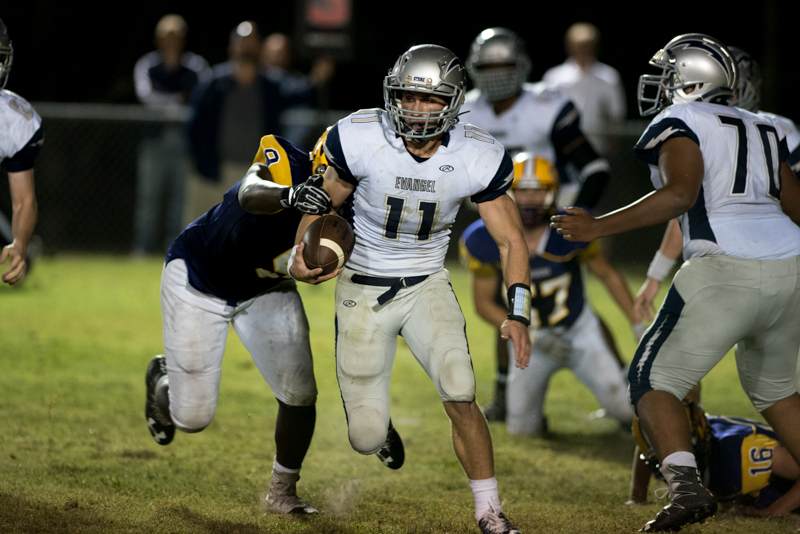 Evangel’s Micah Murphy ran for two touchdowns in the second half against Marengo Academy, but the Lightning fell 35-19. (File)

LINDEN – One of the more interesting and enjoyable storylines this season has been Evangel Christian’s evolution to the 11-man game this fall, and how good the Lightning have been in the 11-man game to date. Evangel has played some good AISA competition this season, including the likes of Cornerstone Christian and Hooper Academy, and the Lightning were 8-0 heading into their Oct. 14 showdown with AISA No. 4 Marengo Academy. Unfortunately for Evangel, it could not extend its overall win streak to 20 games, as Marengo jumped out to a 21-0 lead at halftime and held on for a 35-19 win over Evangel.

“You never like to lose, but it was a whole lot of fun tonight,” Evangel Christian head coach Don Murphy said after the game. “I can’t tell you how proud I am of these kids. They focused, they never quit. We won the second half 19-14. They were a phenomenal team. Well-coached, clean. This was a great night of football.”

Stats were unavailable from the contest, but Evangel senior quarterback Micah Murphy accumulated all three of Evangel’s second half touchdowns on runs of 85 yards and 60 yards, and he had a passing touchdown as well.

The Lightning will now finish out the regular season with an eight-man game against Lyman Ward before preparing for the eight-man ACSC playoffs which will follow soon after. Upon the completion of the ACSC playoffs, Evangel will turn its’ attention to the 11-man NACA (National Association for Christian Athletes) National Tournament in November.

“This was a great stepping stone for us,” Murphy added. “This sets us up well for NACA. To see the character-building experience for these kids in this game, it was great to watch.”

Joseph Ford and the Thompson Warriors beat Huffman High School in a crucial region matchup on Oct. 14, 13-7 in... read more