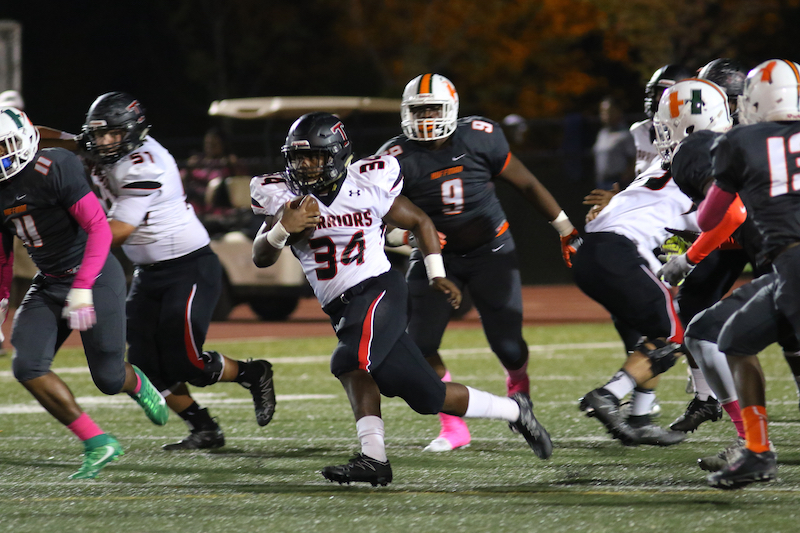 Joseph Ford and the Thompson Warriors beat Huffman High School in a crucial region matchup on Oct. 14, 13-7 in overtime. (File)

BIRMINGHAM – Perseverance is defined as steadfastness in doing something despite difficulty or delay in achieving success, and that is exactly what it took for the Warriors to pull out the win against Huffman on Friday night, Oct. 13th.  At the end of the first overtime, Thompson had captured a 13-7 victory.

Thompson looked to jump on Huffman early, after the Vikings coughed up the ball on the opening kick-off. Thompson’s Gage Motes had the ball bounce right into his arms and he rumbled all the way down to the Vikings two-yard line. Shadrick Byrd carried it into the end zone for the score two plays later, and a Logan Brown extra point gave the Warriors an early 7-0 lead.

The Vikings missed a field goal attempt on their next possession, but after recovering a Thompson fumble, the Vikings used the short field to capitalize and even things up. Jacoby Johnson took the hand-off and carried the ball 19 yards for the touchdown. After the extra point, the teams were knotted at seven.

“After the loss last week, our team could have had a big letdown this week, but they kept fighting and I am proud of how they persevered tonight to get the win,” stated Thompson head coach Mark Freeman after the game.

Thompson struggled with turnovers. Three interceptions and a lost fumble resulted in the Warriors not being able to get into the end zone during the remainder of regulation. When the clock expired, the teams were deadlocked at seven, and it was going to take extra time to determine a winner.

The Warriors went on offense first, and took three plays to get into the end zone. Byrd took the ball twice and carried the ball down to the one-yard line. From there, Josh Huner took the snap and followed his line in for the go ahead score. The extra point was wide right leaving the Warriors up by six.

Huffman took one shot into the end zone on third down only to watch the ball drop incomplete. On fourth down, the Thompson defense swarmed the Vikings quarterback, dropping him for a loss and securing the win.

With the win, Thompson now moves to 5-3 (3-3) on the season, and is currently in a two-way tie for fourth place in 7A Region 3 with Oak Mountain. Because Oak Mountain holds the head-to-head tie-breaker between the two teams, Thompson must beat Hoover this upcoming Friday, and Oak Mountain must lose to Spain Park in order for the Warriors to get into the playoffs for the first time in 10 years.

The Pelham Lady Panthers beat rival Thompson 3-1 on Oct. 13 in a match that helped raise awareness and money... read more