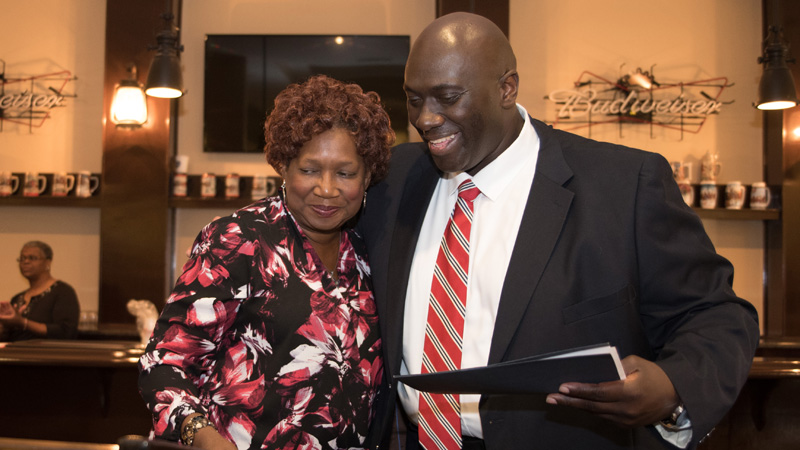 Margaret Kidd, left, was one of several friends and colleagues who made presentations to Harpersville Mayor Theoangelo Perkins during an “Appreciation Day” on Oct. 13. (Photo by Keith McCoy)

HARPERSVILLE – Harpersville Mayor Theoangelo Perkins has made an impact on many during his life and time in office.

Many of those attended an “Appreciation Day” program on Oct. 13 at Bama Budweiser in Harpersville.

More than 125 people were in attendance to honor Perkins.

Former Columbiana mayor Allan Lowe served as emcee and said Perkins would continue to be a pastor, bus driver and full-time father.

“Now he’s going to start into a new business in real estate, and we wish him the best of luck,” Lowe said. “I don’t have a brother, but I’d like to have one like you.”

Perkins, the first black mayor in Shelby County, decided not to seek re-election after three terms in office.

Pastor Jason Alums of Vincent Revival Center offered an opening prayer and said Perkins has a “deeply held love for this community.”

“It’s been a privilege to work with you for the past 12 years,” she said.

“We have a number of great leaders throughout the county, but when I came on board in 2012, Mayor Perkins was one of the first ones to welcome me,” Kirk Mancer with the Greater Shelby Chamber said.

“We had so many good things to say about you,” Ellis said and added that he thought “unselfishness” was the most important word in the commendations.

Perkins was also presented a plaque from an Army company stationed in Germany.

“He has to be one of the nicest people I have truly ever met,” she said.

Pamela B. Lovelady, headmaster at Coosa Valley Academy, said Perkins has shown a love for children, and they love him in return.

“Every time I’ve called him, he’s been there for our school and our community,” she said.

Letters written to Perkins were also read during the program before a slideshow of photographs taken both during his time in office and before.

“I pause to say thank you for your devotion shown to our town of Harpersville. It takes a God-sent person to achieve the goals you have achieved,” one letter read.

“Your dedication to the city of Harpersville has been vital to the success of the city,” another read.

Perkins said he was “overwhelmed” by the show of appreciation at the event.

“We’ve been able to accomplish a lot in 12 years, but it is not because of me. It’s because we worked together,” he said while touting the relationships among town leaders. “I’m not moving, so I want to still be involved with things here. The town is in good hands.”