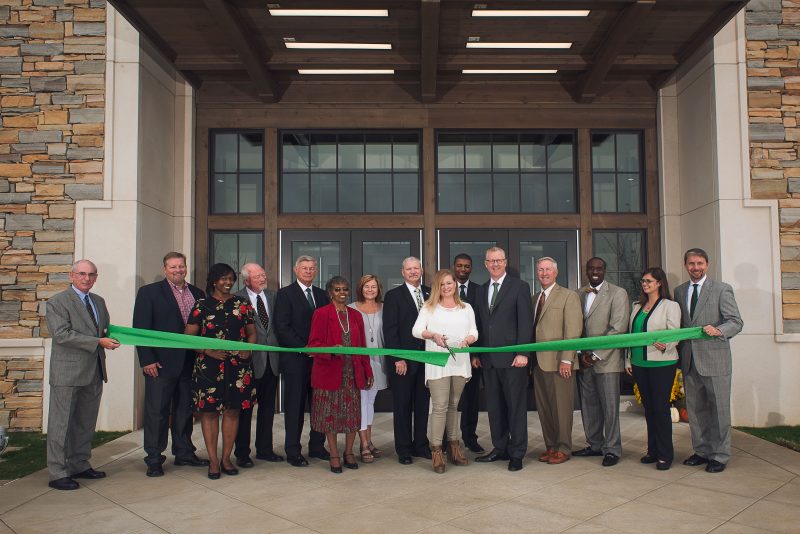 Pelham’s school board, superintendent, mayor, City Council members and other city leaders gather in front of the newly built Pelham Ridge Elementary for a ribbon cutting on Oct. 16. (Contributed)

PELHAM – Droves of parents and students lined the entrance of Pelham Ridge Elementary School Sunday afternoon waiting their turn to get a peek inside of the new 120,000-square-foot school.

On Sunday, Oct. 16, a ribbon cutting and open house was held at the school, which had its first day of class on Monday, Oct. 17.

Pelham City Schools Superintendent Dr. Scott Coefield said the open house was an opportunity for parents and students to find their classrooms and get familiar with the layout of the two-story school.

Pelham Ridge is currently home to about 850 students, Coefield said, but the K-5 school has the capacity to hold 900-plus students. Classes for kindergarten through third grade students are on the first level of the school and fourth and fifth grade classes are on the second floor.

The school’s 46 classrooms have the same design as the classrooms in Pelham Oaks, Coefield said.

“We talked to the teachers and they really like the designs of the classrooms in Pelham Oaks so we just decided to stick with that,” Coefield said.

Coefield said he was very pleased with number of Pelham residents who showed up for the open house.

“I was expecting a crowd, but it seems like people haven’t stopped coming through those doors,” he said.

There could have easily been 1,000 or more people rotating in and out of the school during the two-hour open house.

“We needed this,” she said. “It was past time for a new and more up-to-date school. There’s so much more space.”

Kent, who has a first-grader at the school, said her only concern is that the school is located off Shelby County 52.

“Traffic on 52 is already so bad, so I guess we’ll see how this affects it,” she said.

There are separate school bus and carpool entrances into the school, a feature that parent Brittany Head is excited about.

“Carpool will be a lot better,” said Head, whose daughter is a second-grader at the school. “At the other school buses and cars were dropping kids off in the same area and it was very hectic.”

Parents and school buses will drop students off in the back of the school. Students will wait in the lunchroom or the gym until the bell rings for them to go to class.

Coefield said the first couple of months at the new school will be a transitioning period for parents, teachers and students.

“Whenever you’re opening a new school some kinks are expected, like pickups and drop-offs, but we just ask parents to be patient with us these first couple of months,” Coefield said.