NORTH SHELBY – The driver of a tractor-trailer in a wreck that killed a 25-year-old Shelby County woman has been indicted by a grand jury. 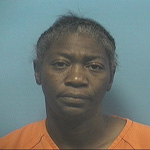 According to the indictment, Garner-James operated a “semi-truck with a defective brake system which defect was known to the defendant.”

Garner-James was extradited from Mississippi and is being held at Shelby County Jail.

An arraignment hearing is scheduled for 8:30 a.m. Nov. 7 at the Shelby County Courthouse with Circuit Judge Lara Alvis.

Mays-Matson was killed when the 2008 Honda CR-V she was driving collided with a 2000 International tractor-trailer driven by Garner-James, according to Alabama State Troopers.

Shelby County Sheriff’s Office deputies and officers from the multi-jurisdictional traffic homicide unit reported to the scene of the accident.

Mays-Matson was pronounced dead at the scene. The Honda CR-V was also carrying an infant, who was injured and transported to Children’s Hospital in Birmingham for treatment.

Garner-James also sustained injuries from the collision and was transported to Grandview Medical Center.