According to a press release by the sheriff’s office, Katelyn Alexis McCullar was found safe. 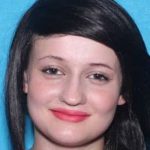 The sheriff’s office said over 50,000 people saw their original missing person poster and thanked everybody for sharing her picture all over Facebook to help spread the word.