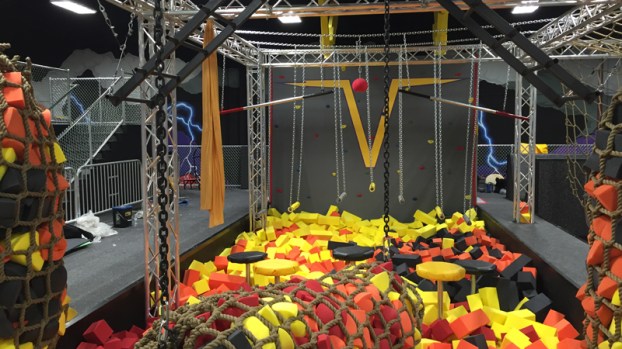 The Next Levl air sports park being built off U.S. 280 will feature an American Ninja Warrior course such as the one pictured.

NORTH SHELBY – CircusTrix, the largest owner/operator of extreme recreation parks in the world, has announced a new park—Next Levl—coming to North Shelby County.

The facility will be located on the northeast corner of the Alabama 119 and U.S. 280 intersection, just behind the La-Z-Boy store. The official address has not yet been released.

The new 30,000-square-foot building is under construction, with a firm opening date to be announced.

The park comes from the same creators of AirWalk, the first trampoline park in the state that is located off U.S. 280.

“We are grateful for how well AirWalk has been received by the Birmingham community over these last four years. Now, we are excited to bring the latest and greatest extreme air sports attractions to Alabama in a much larger facility,” Case Lawrence, CEO and founder of CircusTrix, said in a press release. “AirWalk will be replaced by Next Levl and will close when the new park opens.”

CircusTrix was founded by Lawrence in 2011, and is an innovator in the world of extreme recreation. The Utah-based company has grown since its inception, opening dozens of parks around the world and signing endorsement deals with extreme obstacle athletes like Kevin Bull of American Ninja Warrior/Spartan Ultimate Team Challenge fame.

Each CircusTrix park is constructed to ASTM standards and operated by well-trained, safety-focused staff, making it an ideal environment to experience the thrills of extreme recreation in a safe setting.

Next Levl is slated for completion in January 2017.

For more information, visit CircusTrix.com and check out CircusTrix on Facebook.

By BRIANA HARRIS / Staff Writer PELHAM – A group of businesses in Pelham’s Victoria Plaza and on Canyon Park... read more