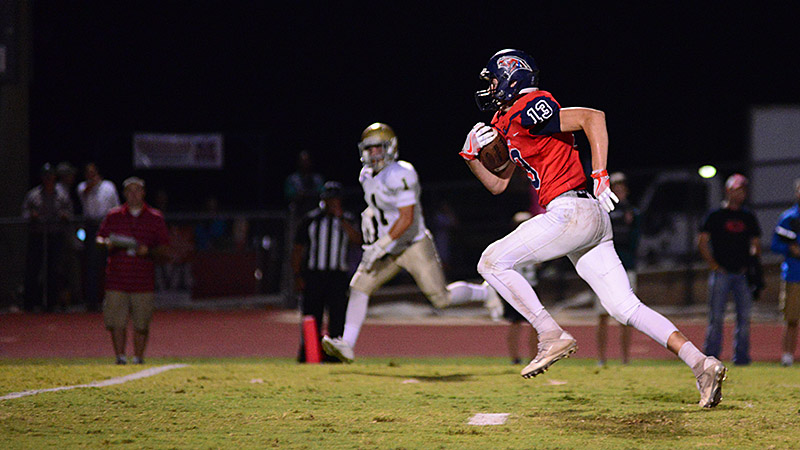 Oak Mountain can run into the 7A playoffs with a win this week against Spain Park. Can the Eagles pull it off? (File)

With a large host of possible football playoff scenarios gulping up big chunks of time and energy, we’re a few days behind schedule with the weekly prediction picks. Apologies. However, we’re back now, with the most important week of the season for a number of teams looming ahead. There are four AHSAA teams (Briarwood, Montevallo, Calera and Spain Park) that have already clinched a playoff berth along with one AISA team (Cornerstone Christian). While those teams don’t have to worry about their season ending after next week, there are four AHSAA teams (Thompson, Oak Mountain, Helena and Chelsea) playing for their playoff lives this week. Let’s jump right in here.

If Oak Mountain wins this game, they are in as the No. 3 seed out of 7A Region 3. If the Eagles lose, they can still sneak in, but it would take a loss from both Thompson and Huffman for them to secure a playoff spot. While Spain Park is in the playoffs no matter what happens, the Jags could be hosting a first round matchup with a win, or they could be on the road against a very, very good Hewitt-Trussville team with a loss. Oak Mountain has pulled off a few impressive wins this season with the sophomore Jackson Kimbrell under center, but the Spain Park defense seems to have found its identity over the last few weeks, as the Jags have given up less than seven points per game since their bye week. Oak Mountain will have to sweat out the Huffman/Mountain Brook and Thompson/Hoover games to find out whether or not it will see the postseason. Spain Park 28 – Oak Mountain 14.

Each of Thompson’s three losses have been decided by a field goal or less. This Warriors team has been in every game they have played right down to the wire, and have just not been able to catch a break when they have needed it most. Since Sept. 23, the Warriors’ defense is giving up just 12 points per game, and coincidentally Thompson is 3-1 in that span. No Thompson team has ever beaten Hoover (0-13 all-time), but if there was ever a group to knock off the Bucs, this one sure has a shot. Hoover has locked up the first seed in the region no matter what happens in this game, and the Bucs simply won’t be as motivated as the home team Warriors will be. With what will undoubtedly be a rabid home crowd out in full support, Thompson will not go down without a fight, and this game could turn out to be a good one. However, at the end of the day, Thompson will fall to 0-14 against Hoover, and will extend their playoff drought for one more season. Hoover 28 – Thompson 21.

Chelsea has doubled up Helena this season in the win column, but that doesn’t matter this week. If Helena wins this game, the Huskies are in the 6A playoffs. Chelsea can still get in with a loss, but a win sure would make things less stressful for the Hornets. Helena is just 1-3 in its’ last four, although the one win was against a solid Benjamin Russell team that whipped Chelsea 40-29 earlier this year. Helena also fell just short against an equally talented Wetumpka team the week prior to its win over Benjamin Russell, and the Huskies seemed to have finally found some stability. At this point in the season, however, it’s become expected for this Chelsea offense to hit at least 35 points (if not much more) per game, and the Hornets are also undefeated at home this season. Helena has only eclipsed 30 points once this season, while Chelsea has failed to hit 30 points in just two of eight games. When a team is undefeated at home at this point in the season and averaging 42 points per game on the year, picking against them just doesn’t make sense. Helena, you made this week interesting, but the 6A playoffs will have to wait a year. Chelsea 38 – Helena 24

Opelika has the 6A Region 3 title all sewn up regardless of what happens in this game. At this point, the Bulldogs are hoping to simply avoid injury before the playoffs start in a few weeks, meaning the Opelika starters will likely have a light week. Pelham on the other hand could use a marquee win over the top team in the region to salvage some of this season. Unfortunately, this Opelika team is simply too talented, and gets out of Pelham with a win. Opelika 28 – Pelham 10.

Briarwood will be the only AHSAA team in the county to win a region championship this season no matter what happens on Friday night. The Lions have won seven in a row since losing their first game of the year to Chelsea, and have turned into a team that nobody is going to want to play in November. While this game against Pleasant Grove is inconsequential for playoff seeding, the Lions are still trying to finish the regular season undefeated in region play for the first time since Briarwood made an appearance in the 5A semifinals in 2011. The starters won’t play the whole game most likely, in order to avoid unnecessary injuries, but that doesn’t mean Briarwood won’t pull out this win. Briarwood 21 – Pleasant Grove 17.

This Eagles team has wrapped up the second seed out of 5A Region 3, and will host a first round playoff game on Nov. 4 regardless of what happens this week. Calera is coming off a 42-32 win over a one-win Sumter Central team, and is now getting ready to take on the one team the Jaguars have beaten this season, Marbury. Calera likely won’t play its starters for four quarters again until the first round of the playoffs, but the Eagles will get this win and finish region play with five region wins for the second year in a row. Calera 32 – Marbury 21.

Woodlawn has only eclipsed 20 points once this season, in a 28-10 win over two-win St. Clair County. Shelby County on the other hand is averaging nearly 27 points per game, despite the Wildcats’ 1-5 record over their last six games. Shelby County will once again miss the playoffs after a promising 2-0 start to this season, but the Wildcats will take some solace in winning at least four games this year after beating Woodlawn at home this Friday. Shelby County 28 – Woodlawn 14.

Montevallo had a tough week last week. The Bulldogs had a chance to prove they belonged among the state’s absolute elite at the 3A level last Friday night on the road against a very good Gordo team, but Montevallo fell flat, and trailed 56-7 at the half before losing 56-21. The Bulldogs have lost five key starters to injury, most of whom played both ways, and there is no telling what a fully healthy Montevallo team would be capable of this season, but this is where we are. This week will be an easy week for Montevallo to regain some momentum, as the Bulldogs should not struggle against a Carbon Hill team that is averaging 14 points per game and giving up nearly 42. Montevallo 35 – Carbon Hill 7.

The Yellow Jackets from Vincent and the Bulldogs from Ranburne have the exact same record heading into the final region game of the year, and have beaten the exact same team to get there, Woodland. The Yellow Jackets needed a last second score to get by Woodland 29-27, while Ranburne handled the Bobcats with relative ease, winning 24-0. While that one performance is not indicative of what will happen this Friday night, it is still a good measuring stick to tell where these two programs are. Vincent has done a number of things well this season to go into the offseason feeling confident about the future, but one win is all the Yellow Jackets are getting this year. Ranburne 38 – Vincent 28.