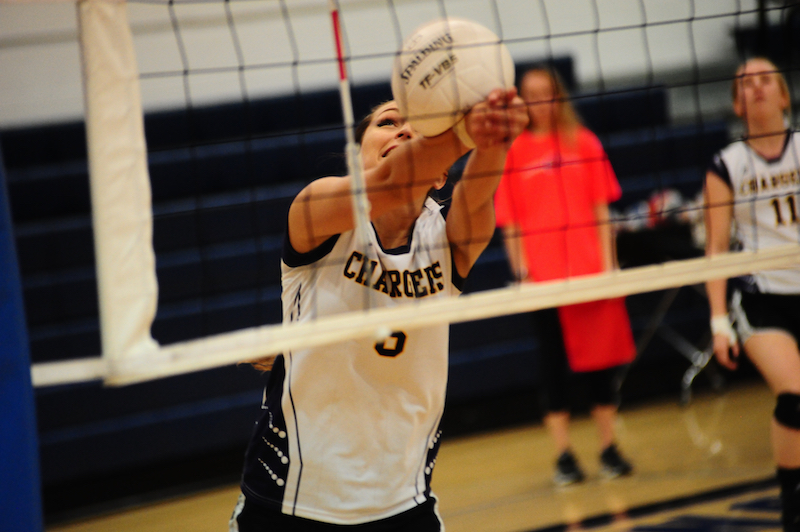 Tessa Nielsen makes a play on a ball during Cornerstone’s AISA A Final Four win over Sumter Academy Oct. 20. The Lady Chargers advanced to the finals, but came up short against Edgewood Academy. (Reporter Photo / Baker Ellis)

MONTGOMERY – In 2015, the Cornerstone Christian volleyball Chargers won their first-ever AISA A volleyball state title after a marathon 3-2 win over previously unbeaten Northside Methodist Academy. Cornerstone played 10 sets of volleyball on that day, winning both its Final Four match and the finals in 3-2 fashion to snag the state title. Fast-forward a year, and the Lady Chargers found themselves back in Montgomery at Faulkner University yet again, ready to defend their state title.

In the Final Four match, the Lady Chargers came up against a talented and aggressive Sumter Academy team that Cornerstone had not seen before this season. Cornerstone took the opening set 25-21 to pull ahead early, but then promptly dropped the next two sets by scores of 25-18 and 25-15. After the third set, it was the Lady Eagles that seemed to have all the momentum, and Cornerstone was reeling. However, with their season on the line, the Lady Chargers responded in a big way in the fourth set.

Cornerstone was not overly concerned with hammering Sumter Academy with spikes, but rather began to serve more consistently and played near-perfect defense in the fourth set, digging out a number of potential kills from the Sumter Academy attack. Cornerstone pulled ahead in the fourth set 13-6, and eventually pulled out the fourth set 25-17 to force another five-set match. In the fifth set, the Lady Chargers reeled off six-straight points from a 4-4 tie to take a commanding 10-4 lead, and pulled out the come-from-behind win 25-21, 18-25, 15-25, 25-17, 15-8 to advance to the state finals yet again.

The Lady Chargers then advanced to the AISA A finals for the second year in a row, but were unable to successfully defend their title, losing in straight sets to Edgewood Academy.

“It was a tough game, Edgewood was a very tough team,” Frey said after the finals loss. “Our girls played their hearts out, and I’m extremely proud of the season we’ve had.”

While Cornerstone was unable to successfully pull off the title defense, the future still looks bright for a Lady Chargers team composed of a number of younger players.

Cornerstone will graduate five seniors off this team, Audrey Davis, Sophie Campbell, Tessa Nielsen, Kaylee Witten and Audrey Schrieber, but will return a number of key pieces to next year’s team, including Annika Walker, Morgan Ciesla and Carlee Halbert.

Cornerstone finished the season with a 15-8 overall record, and made its’ fifth-straight appearance in the AISA A Final Four.