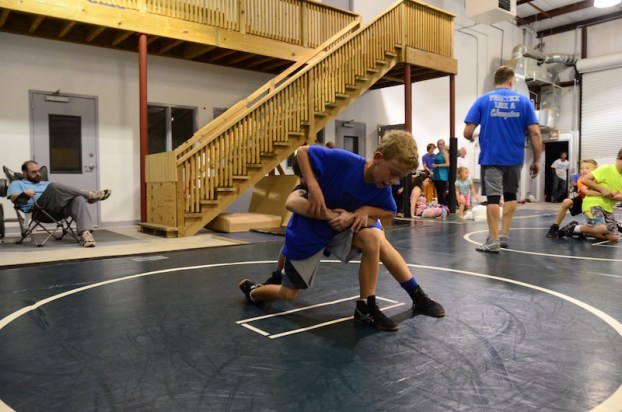 Cody Sumners is in his second season as president of the Chelsea Wrestling Club and is trying to start them out young so they aren’t at an unfair advantage in the future. Here a couple of students learn some of the proper techniques when it comes to wrestling. (Reporter photo/Alec Etheredge)

CHELSEA – Cody Sumners not only balances his night shift for the Shelby County Sheriff’s Office and being recently elected to the Chelsea City Council, but he is also in his second year as president of the Chelsea Wrestling Club.

The club started in 2010 with six kids, ranging in age from kindergarten to sixth grade. That same youth portion that Sumners now runs has grown to around 41 kids.

“Chelsea is a 6A school now so we have to keep up with the other schools around the area,” Sumners said. “Other schools are starting them out young, which is helping their high school teams succeed. That’s our goal as well. We want to start them young so we can grow high school wrestling in Chelsea.”

There is no doubt the numbers are supporting his wishes already. Since the club started, it has expanded to middle school and high school, and now includes over 100 members.

“It’s just been fun to see the program grow,” Sumners said. “We’ve gone from practicing in the middle school gym and having to roll out the mats before every practice, to having this nice facility and keeping the mats rolled out.”

The building he speaks of is known as the Highway 51 building, which is located at 7381 County Road 51 in Sterrett right next to the tennis courts.

Sumners has three coaches helping him out with the actual coaching part, while he focuses on the administrative side.

“It’s probably a good thing I don’t know too much about wrestling and I let the coaches take care of that because setting up the tournaments and handling the administrative side takes a lot of work,” he said.

Although he admits not knowing a ton about wrestling he loves being around and learning everything he can, while watching the kids grow.

“At the beginning of the season they are quiet and reserved, but by the end they have a lot of confidence and that’s fun to see,” Sumners said.

He said by watching his son’s demeanor he already understands that wrestling is unlike many other sports.

“When you make a mistake in wrestling it’s a lot different than making a mistake in a team sport because you don’t have anybody there to pick you up, the outcome relies solely on yourself,” Sumners said. “If my son makes a mistake in baseball he doesn’t seem too bothered by it, but when he makes a mistake wrestling, you can see a visible disappointment on his face.”

Practice kicked off on Oct. 17, but Sumners mentioned because football season lasts so long they don’t really stop accepting people into the club so registration is still open.

The first dual is scheduled for Nov. 12, while the first actual tournament will take place on Nov.19.