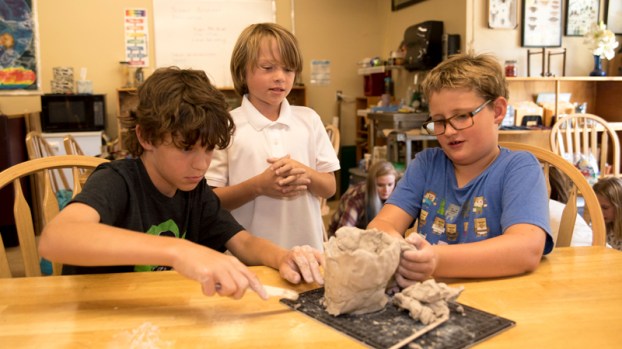 Noah Holmes, Chance Smith and John Underwood make a clay pot that represents the culture they created as part of a Digscovery project facilitated by Jefferson State Community College. (Photo by Keith McCoy)

MT LAUREL – Hilltop Montessori School students are learning about culture by creating their own.

After visiting the Birmingham Museum of Art on Sept. 23 to see artifacts from various historical cultures, the students spent time as a class creating their own culture—everything from climate to food to religion.

Representatives from Jefferson State Community College, which is facilitating the “Digscovery” project with Hilltop and Cornerstone Christian School in Birmingham, visited Hilltop on Oct. 13 to help the students make artifacts for their culture.

With materials provided by Jeff State and its Phi Theta Kappa honors society, Cleo Moore built a dollhouse and dolls that the children of the culture would play with.

“When I was really little, I liked playing with dolls and making string dolls,” Moore said of how she decided what artifacts to create.

Teacher Janet Lewis ensured each student or group of students was working on some different artifact and that they were all consistent with the culture that had been created.

Lewis said the class started creating its culture by deciding where it would live. When the class was split about two different climate zones, a compromise was reached.

Once the climate was determined, many other details followed—including that the people eat lots of fruit, wear clothing made from cotton and animal skins and worship two gods, a unicorn and fox.

“The kids take an idea and they run with it,” Lewis said.

Other artifacts being made included clay images of fruit by Martin Vizzina and Sam Parrish.

The pair said they liked the class’ idea of dual gods, with the unicorn representing day and the fox representing night.

The final part of the project will be Excavation Dig Day.

Artifacts created by Hilltop and Cornerstone students will be buried at the opposite campus.

Then, the students will unearth the artifacts created by the other students and try to decipher what the artifacts tell them about the imaginary culture.