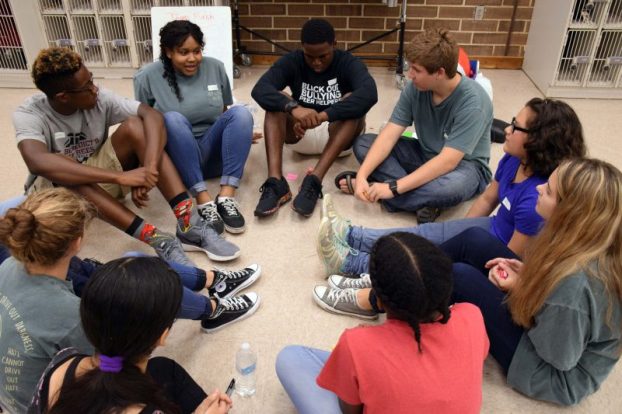 PELHAM – A select group of students at Riverchase Middle School spent an entire day learning about tolerance, stereotypes, abuse, bullying and the impact that bullying can have on others as a part of Outside-In Day, sponsored by Camp Fire USA.

Pelham High School Peer Helpers, a group of 10-12 graders who have been entrusted to help guide younger students, led the group discussions from 8:30 a.m.-2:30 p.m. on Thursday, Oct. 19.

About 35 seventh and eighth graders participated in Outside-In Day.

Copes said the peer helpers receive training on how to lead games and discussions. Students must go through an interview process to become a peer helper.

The Riverchase Middle students who participated in Outside-In Day were selected by teachers. Copes said teachers selected a diverse group of students representing different academic levels, socioeconomic levels, races and gender. Copes said the goal was to gather a complete variation of the student body.

Students learn not to assume that a person will act a certain way because of their age, race or ethnic group.

“It starts off fun and laid back, and then as the day goes on the discussion gets more serious,” Copes said. “They start to discuss actual situations they’ve been in and the Peer Helpers talk to them about different ways they could’ve handled those situations. The peer helpers build them up and make them feel good about themselves.”

Kelly Koncsol, Camp Fire USA program manager, said the program developed in response to a rise in bullying situations. She said the goal is to break down barriers and have students hang out with people who are different from them.

Copes said there have been times when peer helpers had to report situations that could have been dangerous.

“Those students felt comfortable enough to open up to their peer helper about their real life situation,” Copes said.

Kelsey Schoemeyer, a 12th grade peer helper, said she has learned to recognize situations when they are happening because of the training she’s received as a peer helper.

“Being a peer helpers has been one of my most memorable experiences in high school,” she said. “I’ve grown close to people that I would’ve never thought I’d be friends with. I’ve learned not to judge people because everyone’s going through something.”

Riverchase Middle eighth-grader Chase Christian has participated in the program twice. He said he hopes to become a peer helper in the 10th grade.

“I admire the peer helpers because they create a safe space for us to open up,” Christian said.