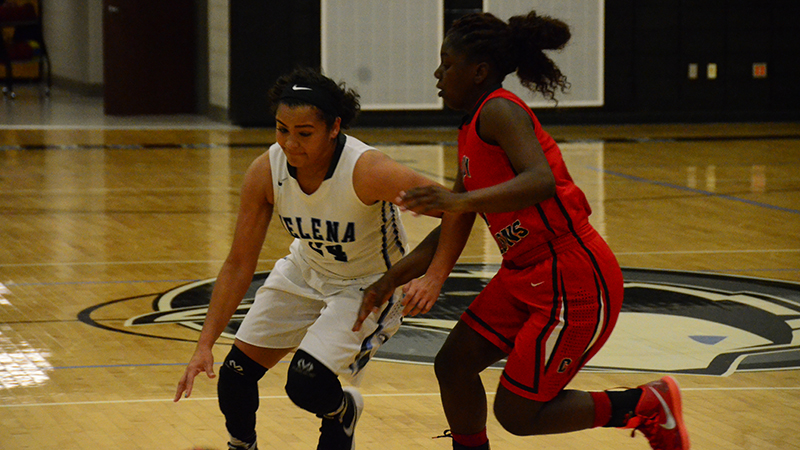 Senior Mekhi Mayfield (24) and the rest of the Helena Lady Huskies basketball are preparing for their first season in Class 6A action in the 2016-17 season. (File)

HELENA–The temperature outside is gradually starting to dip, which means basketball season is approaching fast and the Helena Lady Huskies have been hard at work preparing for their first season in Class 6A Area 8 action.

Last season, despite learning a new system and adjusting to first-year head coach Alan Skinners’ coaching philosophy, the Lady Huskies still made it to the Class 5A Sub-Regional round and look to build on the momentum in 2016.

The biggest change for the Lady Huskies this year is making the jump from Class 5A to Class 6A after the recent realignment that placed Helena in an area where they will compete against Pelham and Chelsea during the 2016-17 season.

Although the area opponents will be different this season, Skinner will still implement the same coaching philosophy and try to have another successful season in 2016-17.

One thing Skinner believes helped his team last year and will also help this season is scheduling tough competition.

“I don’t put as much value in scheduling a team that is on the same caliber as us and then we beat them by 30,” said Skinner. “I think our team gets way more value out of scheduling non-area opponents that are established programs that challenge us. That’s why I’ve scheduled programs like Hoover, Mountain Brook, Vestavia, Thompson and so on because I think by playing those teams it only makes you stronger for the postseason.”

The Lady Huskies will return a large portion of the roster as Helena lost just two seniors from a season ago, Allison Laatsch and Brianna Sturdivant.

In 2016, the Lady Huskies will rely heavily on the senior leadership of Jenn Brown, Mekhi Mayfield, Mary Elizabeth Laatsch and Morgan Watkins.

“Jenn Brown is great in the post for us and I know Mekhi will always play as hard as she can all the time,” said Skinner. “This summer, Mary Elizabeth had several games where she knocked down a ton of threes and she can really shoot the ball. Morgan is a player that always has her motor running and is the kind of kid that’s not afraid to get on the floor and get a loose ball.”

In addition to the seniors, Skinner also said Brandis Lang and Jordan Jones will be big producers and have stepped up to become leaders. The Lady Huskies also picked up three newcomers that have bought in 100 percent and there’s been no lag in their work ethic, according to Skinner.

“I think just the mindset around here seems very different compared to last season,” said Skinner. “It seems more businesslike and I don’t have to spend the majority of time teaching them and them learning me and my system like it was last year with me being a first-year coach.”

Another change in the Lady Huskies basketball program has been the addition of a junior varsity team.

“When I came to Helena I made myself two attainable goals,” said Skinner. “One was to make it to the Sub-Regional playoff game and to also establish a JV program. This year, we’ll have 7-8 girls on the JV program.”