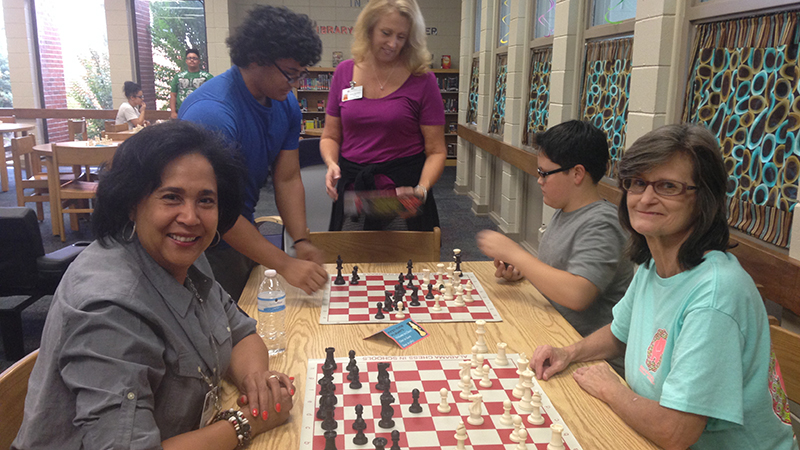 By Amalia Kortright / For the Reporter

MONTEVALLO–Students, parents and teachers gathered at Montevallo Middle School to take part in the Montevallo Community Chess Night, where members of the community gathered to play and discuss chess strategies and techniques. Chess night took place from 4 to 6 p.m. Students from the elementary, middle and high schools, as well as from the University of Montevallo, were invited to attend.

“It’s about teaching kids how to think through everything that they do. It teaches skills like patience, persistence, etiquette and sportsmanship. There are a lot of different skills that chess helps to promote,” said chess and GRC teacher Telura Hamilton.

The Montevallo Community Chess Night is part of an Alabama Chess in Schools Initiative, which aims to promote higher level thinking skills by teaching chess as part of the curriculum in schools.

“I think it’s wonderful to have these events to draw in people from all different levels. It’s a valuable experience for everyone involved. I first learned how to play when I was in the 4th grade, and something about the game fascinated me. I still have this sense of childlike wonder when I think about chess. It gives a lot of people a sense of place, and it helped me find my way in life,” said Varagona.

This is the second year that Montevallo Middle School has had a competitive chess team.

“We’re just getting started. A lot of kids are honing their skills before we start competing this year. Last year, we went to a lot of tournaments and earned a large number of trophies and did really well.” said Hamilton.

There are also plans to establish a competitive chess team at Montevallo High School.

“There’s a lot of interest in chess at the high school. We’ve had a chess club for several years, but we haven’t had a competitive team before. The students who were in the eight grade when the chess club first started are now in the ninth grade, so we’re in the process of forming a competitive chess team,” said 10th and 11th grade English teacher Erma Hinton.

Principal Shelia Lewis has noticed an improvement in the academic and social aspects in the lives of the students involved in this program.

“Last year, we had a particular student join, and we were surprised. He was always in detention, his grades weren’t always good and he wasn’t a part of any outside activities like band or sports. He got involved in the chess team, and his whole personality changed. He came out of his shell, because he was a part of something. It makes you feel important and connected with other students. I’m already seeing it again with a couple of students this year.”

The next Chess Night is scheduled to take place in January at Montevallo Elementary School.