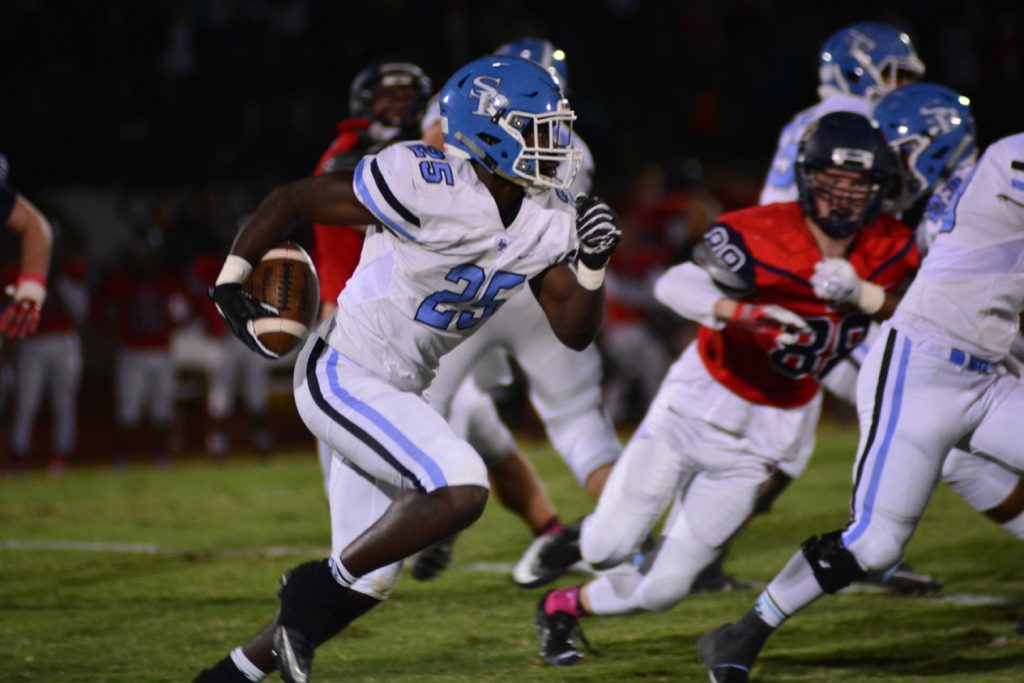 Spain Park is one of two county teams facing off against undefeated opponents this week. How will the Jags fare in the final tune-up before the playoffs? (File)

Week 10 was a big week across the state in prep football, as playoff bids were won and lost across a plethora of games this past Friday night. County play was no different, as Chelsea and Oak Mountain punched playoff tickets, while Thompson and Helena were left on the outside looking in along with Vincent, Shelby County and Pelham. Now, heading into the last week of the regular season, a number of teams will use this week as a tune-up for the weeks to come, while others will hope for one last chance to snatch some gridiron glory in 2016. Let’s jump in.

Even with a heartbreaking 23-20 loss to Spain Park, the Oak Mountain Eagles are headed to the 7A playoffs. Oak Mountain will head to undefeated Hewitt-Trussville on Nov. 4 to take on the Huskies, who are averaging a whopping 46.1 points per game, for a first-round matchup. Before that happens, however, Oak Mountain must travel to Hazel Green to close out the regular season. Hazel Green finished tied for fourth in 6A Region 8, but will miss the playoffs due to a tiebreaker with Muscle Shoals. With that loss, this game with Oak Mountain signifies the end of the Trojans’ season, and as a result Hazel Green will be motivated to end its season on a high note. Oak Mountain has more football to play, and will fall on the road this week. Hazel Green 28 – Oak Mountain 14.

Minor has locked up a region championship this year for the first time since 2003, and the Tigers have a chance to finish the regular season with a perfect 10-0 mark for the first time since 2000. While both Minor and Spain Park are already in the playoffs, and technically this game will hold no real weight on how either of these teams judge their finished product this season, this game still has significance for both. For Minor, a team that was not ranked in the 6A ASWA top 10 until Week 4 of this year, this represents a chance to finish the regular season as only the third team in the program’s 96-year history with a 10-0 record. For Spain Park, the Jags have a chance to spoil that party. Minor, on top of being a very, very good team, has more reason to show up in this one than does Spain Park. Minor 48 – Spain Park 32.

After getting shut out last week against Hoover, Thompson’s season will end this Thursday against undefeated and 6A No. 1 Hillcrest-Tuscaloosa. Hillcrest has routinely laid waste to teams this season, and has won each of its nine games to date by an average margin of victory of 35 points. Seeing as Thompson has not scored 35 points in one game this season, the Warriors are unlikely to pull this one out. Thompson will end the year 5-5 for the second-straight year. Hillcrest-Tuscaloosa 42 – Thompson 14.

Here’s a bit of interesting history. Current Chelsea head coach Chris Elmore is the son of former Cullman head coach Jerry Elmore. The current head coach at Cullman, Mark Britton, was the quarterback at Cullman in 1979, during Jerry Elmore’s first season as Cullman’s head coach, when Chris Elmore was a boy. Now the two are meeting as head coaches for the first time in their careers. Elmore brings a potent offense accentuated by one of the best backfields around while Britton, in his 16th season as Cullman’s head coach, has the Bearcats back in the playoffs for the 14th time since he took over in 2001 as the No. 3 seed out of 6A Region 7. This game has an extra level of intrigue considering how far back the two coaches go, but at this point in the season there are only a few teams capable of matching Chelsea’s offensive potential, and Cullman isn’t one of them. Chelsea 45 – Cullman 35.

The Huskies had a chance to clinch a playoff berth last week with a win over Chelsea, but Helena fell flat, and as a result this Friday night will mark the end of the 2016 season for this bunch. While Helena has shown glimpses this season, the Huskies were not able to string together enough consecutive region wins to sneak into the 6A playoffs in their first year in the classification. Pell City, the No. 4 seed out of 6A Region 7, will come up against a Helena team motivated to end its season on a high note, and the Huskies head into the offseason with a 4-6 record behind them. Helena 28 – Pell City 21.

Both Pelham and John Carroll will wrap up their respective seasons this week, and both have a chance to end their seasons in a better place than they were a year ago. The Cavaliers have already made sure of that reality, as John Carroll was winless in 2015 and has won two games this year under first-year coach Logan Colafrancesco. Pelham’s only win of the 2015 season came against John Carroll, but this win won’t come as easily as it did a season ago. The Panthers haven’t been able to win as many games as they wanted to at the start of this year, but they will finish this season with two wins. Pelham 35 – John Carroll 14.

Like a host of other games this week, this game would be a great one to watch if both teams weren’t heading to the playoffs one week later. Briarwood and Madison Academy have met twice before, in each of the last two years, and the Mustangs have won both of those contests. This year, Briarwood is heading into the 5A playoffs as region champs while Madison Academy is still waiting for the dust to settle across a three-way tie at the top of 4A Region 7 to see whether it will host a first round game. This game means slightly more to Madison Academy, as a win over Briarwood would go a long way toward helping the Mustangs break free of the three-team tie they are in for the top spot in their region. Briarwood, however, has a very good football team that has established a knack for winning close games, and the Lions win their ninth straight game this week. Briarwood 28 – Madison Academy 24.

This is an odd situation. Calera and Sylacauga are meeting in the final game of the regular season, and then are turning around and playing in the first round of the 5A playoffs next week as well. This is relatively unprecedented, and creates a unique opportunity this Friday night, as both teams get first-hand scouting on their first-round opponent. Neither team is going to want to tip their hand for the impending playoff game, and neither team is going to be that torn up with a loss. A game like this is impossible to call, but Calera hasn’t lost on the road this season, so let’s go with the Eagles. Calera 32 – Sylacauga 24.

This Fultondale team is very talented. The Wildcats are averaging 47.2 points per game and are giving up just 17, and have won their eight games by an average margin of victory of 35 points to date. They have locked up their first region championship since 2002, and are 2-0 all-time against Montevallo. The Bulldogs, however, are obviously no slouches themselves. Behind Zac Oden, one of the top passers in the state this year, Montevallo has tied its number of regular season wins from last year, and has a chance to win nine games in the regular season for the first time since 1983. While both have the playoffs to worry about in a week, this should still shape up to be one of the better games across the county. Montevallo 45 – Fultondale 39.

This is the last game of the season for both these teams. Victory Christian will try to end the season with a .500 record, a feat the Lions have only done once since 2010, while Vincent is going for its second win of the season. While Vincent has improved from where it was a season ago, the Yellow Jackets have already seen their biggest highlight of this 2016 season come and go, and will end this year with one lone victory. Victory Christian 45 – Vincent 21.

By BAKER ELLIS / Sports Editor Stats were not available from the following games at the press deadline, and only... read more