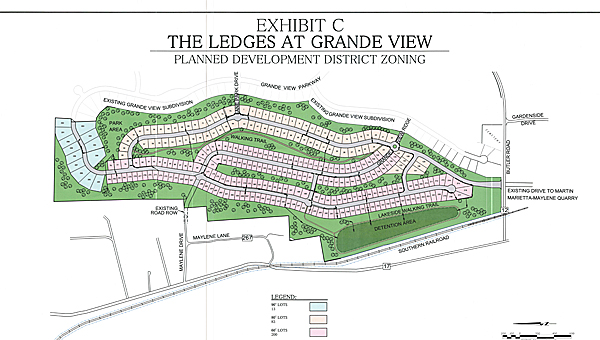 The Alabaster Planning and Zoning Commission voted on Oct. 25 to deny a rezoning to allow for “The Ledges at Grande View” on a currently vacant lot near the intersection of Butler Road and Shelby County 17. (Contributed)

ALABASTER – The Alabaster Planning and Zoning Commission voted to deny a rezoning to allow a proposed new development in the Grande View subdivision to move forward during an Oct. 25 meeting after the city and the developer were unable to agree on an architectural review process for the addition.

The commission voted unanimously during the meeting to deny a planned development district rezoning for about 140 acres west of the current Grande View subdivision off Butler Road. Developers Cameron and Concetta Givianpour were looking to bring “The Ledges at Grande View” subdivision to the currently vacant lot.

The Commission originally was set to vote on the rezoning request during its Aug. 30 meeting, but tabled the vote until Sept. 27. On Sept. 27, commission members again tabled the matter until Oct. 25 after they said they did not have enough time to review updated plans for the development.

When the Grande View neighborhood was originally developed in the 1990s, the adjacent vacant land was zoned for townhomes, but was later rezoned R-2 residential, which requires a larger lot size.

The Givianpours were looking to have the 140 acres rezoned as a planned development district, which would have tied the overall development plan to the property, and would require city consent to change it.

“What I’m asking for is to do justice for the citizens of Grande View and finish that subdivision, give them the second entrance and improve lift station conditions out there,” Cameron Givianpour said. “What I’m saying is y’all should please recommend, based on your knowledge, to the City Council that they approve this so we can provide the second entrance, fix the community, finish the community, turn the community over to the residents and we can just go about our way.”

During a work session before the Oct. 25 meeting, Alabaster Planning and Zoning Coordinator Sherri Proctor recommended the commission deny the rezoning request because the development plan did not “state the intent to comply with the subdivision regulations, including the requirement to submit for architectural review during the subdivision review process.”

Through the architectural review process, the developer would have had to either submit a pattern book outlining a range of home styles for pre-approval by the commission or brought each plot to the commission for approval before construction began on the plot.

Commission members Mike Allen and Gary Wright said they were not comfortable voting on the PDD plan as it was submitted because it did not include a provision for the development to go through the commission’s architectural review process.

“I continue to have a couple hangups,” Allen said. “I am not comfortable with this not being subject to the subdivision regulations, particularly the architectural review.”

“I don’t feel comfortable moving forward until those issues are addressed,” Wright added. “That area does need to be developed, but it needs to be developed the right way.”

Cameron and Concetta Givianpour said they were not comfortable including the architectural review requirement in the PDD plan.

“We were asked to apply for the PDD zoning because it locked us into a design,” Cameron Givianpour said. “I’m asking if we can just not have to do this (architectural review), because the situation that we would find ourselves in would be catastrophic for my family, because we have the biggest financial investment in this area.”

Concetta Givianpour said including the architectural review process in the plan would present challenges to potential builders in the subdivision.

“We’ve got to sell these properties to builders, and we have talked to many of them,” Concetta Givianpour said. “The more difficult it is – the more levels of challenges – the more reluctant they are to build there.

“We would be putting the control and the last word in the hands of the city. If it doesn’t work, the city’s not at risk, we are. That’s a risk I can’t afford to take,” she added. “I really feel like I’ve lost a year of working on this to reach this end over an issue that usually never comes to light with trying to get a plan approved. I feel bad about having wasted our time, and your time and their time. It’s just something we cannot give up.”