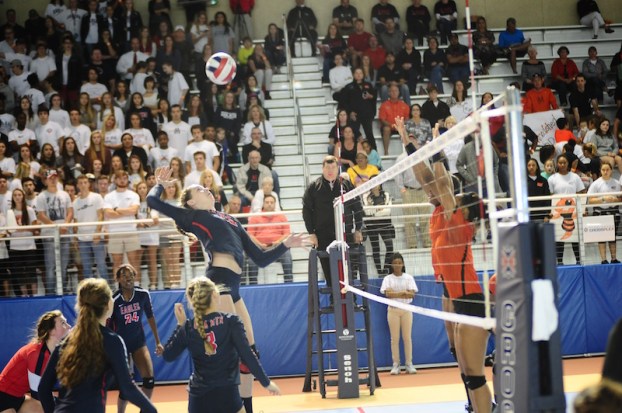 Oak Mountain junior Torie Denkers goes up for a kill against number one seed McGill-Toolen in the quarterfinals of the state volleyball tournament. (Reporter photo/Baker Ellis)

BIRMINGHAM – The Oak Mountain Lady Eagles’ volleyball team found themselves in the quarterfinals of the 7A state volleyball tournament on Wednesday, Oct. 26 at the Birmingham Crossplex facility.

After beating Spain Park and losing to Mountain Brook in the Area 6 tournament they made their way into the super regionals to take down Bob Jones in the first round, which would guarantee them a spot in the quarterfinals of the state tournament.

“I’m extremely proud we made it this far,” Oak Mountain head coach Tien Le said. “We had to beat a Spain Park team in area who is a very, very good team, and then the first round in regionals we had seed number three against Bob Jones, which took a five-set thriller.”

The unfortunate reality for the Eagles is that they would have to face off against the McGill-Toolen Yellow Jackets in the quarterfinals, who won the South Super Regional, was the runner up in last year’s state tournament and oh yeah the number one seed in this year’s tournament.

“That’s the unfortunate part about finishing fourth in the super regionals,” Le said. “The other three teams had much easier roads in their first match I think.”

Junior Kathryn Beard would help the Eagles in the first couple of sets with some important digs and assists as the Eagles hung in tough, but would eventually drop both of the sets by a score of 25-19 and 25-21.

“We were definitely in it the first two sets,” Le said. “We had opportunity to capitalize, but we just weren’t quite as relaxed in this match as we were against Bob Jones. This is state and it’s very tough to win your first time at state.”

In the third and final set, McGill-Toolen was placing the ball perfectly and Oak Mountain had no defense to stop Yellow Jacket’s net game from sophomore Kenya McQuirter and senior Kristen Carter.

The athleticism of the front line proved too much for the Eagles as they would drop the set 25-9, and the match 3-0.

Beard led Oak Mountain with nine digs, 17 assists and 2 aces and Senior Jacoby Sims led the team with 12 kills, while also adding three digs, one block and one assist.

“The seniors are thrilled,” Le said. “We haven’t been to state in the last four years and for them getting here was their goal and I’m real proud and happy for them that was able to happen.”

Oak Mountain ended their season with a 28-19 season record, which is the second worst record of any 7A team in the quarterfinals showing how magical their run was this post season and how proud coach Le was of his girls for fighting until the end.

“We had it tough the entire post season with our schedule,” Le said. “I guess we just ran out of a little magic with number one ranked McGill.”