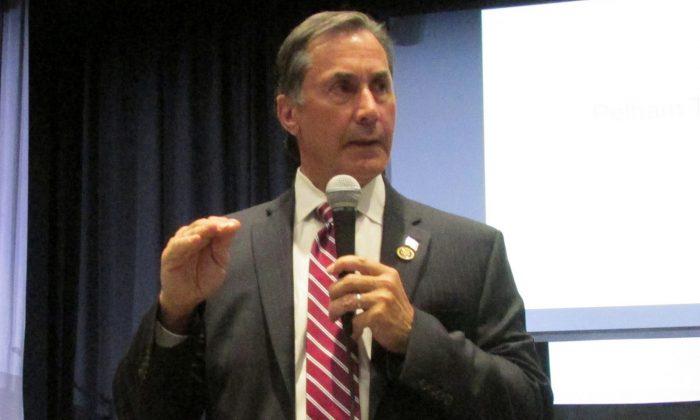 By MICHAEL J. BROOKS / For the Reporter

PELHAM – U.S. Rep. Gary Palmer of Alabama’s 6th Congressional District said America is on a breakneck course to bankruptcy, and pledged to do all he could to stop wasteful government spending.

Palmer conducted a Town Hall meeting on Oct. 24 at Pelham High School. The event was hosted by Mayor Gary Waters and the Pelham City Council.

Palmer said organizations often come to him asking for money, and he has to turn them away because the government is broke.

“Not only has our government wasted taxpayer money,” he said, “but we have agencies who collect fines, fees and lawsuit judgments and fail to turn these funds over to the treasury. Our government is spending more and collecting more than they’re telling you.”

Palmer said he has an engineering background and ran a think tank for 24 years and has an analytical mind. He said he asked to be on the budget committee when he went to Congress in 2015, and has tried to make his voice heard on the committee during his one year and nine months in office.

“The United States is literally an energy super power,” he said. “We have an enormous amount of oil, coal and gas that we can sell and add funds to the treasury, but the Energy Security Act of 1975 prevented us from selling crude oil at a time when we had an energy crisis.”

Palmer said Congress approved the measure and the president signed it into law.

“Russia is rebuilding and modernizing their military through their energy sales and could hold Europe hostage in the dead of winter,” he said.

Palmer said he’s spoken out against a plethora of federal regulations that he called “the hidden cost” of government.

“These regulations aren’t a tax,” he said. “A tax provides money we can use for services. These hidden regulations–some $1.8 trillion–simply increase the cost of living for all of us. Households making $30,000 annually spends 24 percent of their income on energy. This is true for seniors with fixed incomes, too. I’ve supported legislation to reign in the EPA.”

“Our country has had 1.5 percent job growth for the past five years,” he said.

“This is anemic. More businesses are closing than starting. We rank 12th in the world for business start-ups — behind Hungary. Currently one in six males in our country is unemployed. Excessive regulations increase the cost of doing business.

In response to an audience question about relief for those with student loans, Palmer said he thought the federal government should get out of the loan business, and colleges and universities should use more of their endowments to lower the cost of college. Citing his own loans, now repaid, Palmer told the questioner he didn’t believe anyone had a right to free college.

“I worked my way through college,” he said.

In response to another question about rising healthcare costs, Palmer said he believed the combination of a health-savings plan and replacing the present system with a more catastrophic plan would be the best route.

“The Affordable Care Act is collapsing of its own weight,” he said.

Another questioner asked about the Nov. 8 election and how it would change things in Congress.

“If Hillary Clinton is elected and we keep the House, we’ll go on in Congress as we now do. We won’t have a budget; we’ve not had one in eight or 10 years. We have continuing resolutions to keep the government open. Trump wasn’t on my list initially, but I’ve looked at his team. They’re great people. He will sign what we pass.”

An audience member shouted “shut it down” when Palmer mentioned continuing resolutions.

“I’m not for government shut-downs because that puts our military at risk. We live in a dangerous time with Russia and China advancing as they are,” he said.

Coefield reported enrollment in Pelham schools up five percent this year and the students-in-poverty numbers (lunch assistance) is down from 42 percent to 37 percent. He said the board is reviewing the previously-announced policy of background checks for all parents eating lunch in the schools, and that updates have been posted on the board’s website, pelhamcityschools.org.