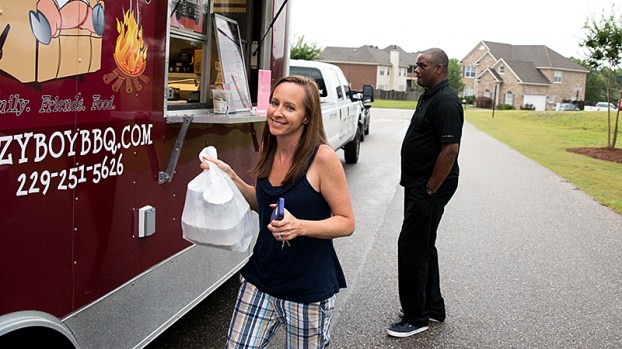 The Alabaster City Council is considering an ordinance to allow food trucks to operate in the city, and will hold a hearing on the matter on its Nov. 27 meeting. (File)

ALABASTER – The Alabaster City Council will hold a public hearing on Nov. 27 and likely will vote on an ordinance to allow food trucks to operate in the city after the City Council approved the hearing during an Oct. 24 meeting.

The public hearing will be held during the council’s regular meeting on Nov. 27, which will begin at 7 p.m. at Alabaster City Hall.

Council members are considering adding a provision to the city’s business license ordinance allowing multiple types of “mobile food units” to obtain licenses to operate in the city. If passed, the provision would allow licenses for four types of food truck vendors in the city:

-Meal stops: No more than two hours each day, and the food truck must be located on private property off public rights of way unless the vendor has prior written approval from the city to operate on public property. Meal stop food trucks would not be allowed to operate within 200 feet of a brick-and-mortar restaurant.

-Event food vendors: Must operate on property owned or solely controlled by the sponsor of an event, and with the written permission of the event sponsor. Food trucks may only operate from a fixed location during the official hours of the event.

By GRAHAM BROOKS / Staff Writer HELENA–The city of Helena will once again celebrate the holiday season with the 46th... read more