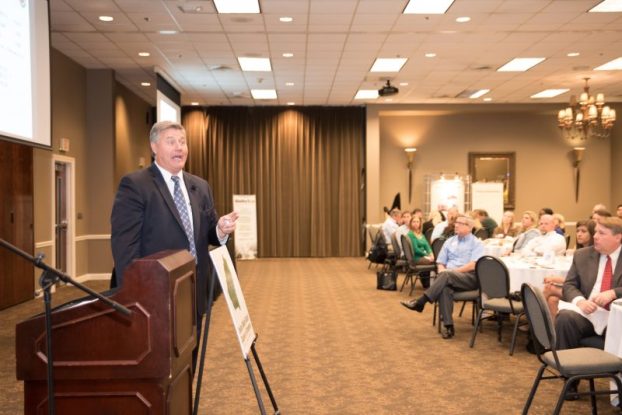 Shelby County Manager Alex Dudchock gave an update on the county's progress on Oct. 26 during his State of the County address. (Reporter photo/Keith McCoy)

Dudchock highlighted several of the county’s accomplishments over the past year, including lowering the unemployment rate, population growth, the acquisition of land, economic development initiatives, tourism and the creation of Compact 2020.

Summaries of Dudchock’s statements are below.

-The county has also executed a funding agreement with the Alabama Department of Transportation and started the design phase of a road and bike lane project at Oak Mountain State Park. The county is also involved in a land acquisition from Forever Wild near the Cahaba River Park. Dudchock said the deal, which is expected to close this week, will increase the number of recreational park acres in the county from 315 to 1,527 acres.

-The county landfill was selected by the Alabama Department of Environmental Management to receive the State Chapter of Solid Waste Management Association’s Landfill of the Year in 2015.

-The county is taking steps to increase its revenue stream. In six to 12 months, Dudchock said the county will have enough information to determine if it will get into the energy production business. The plan would be to produce energy and sell it to Alabama Power.

-In the realm of capital projects, the county is working to build 12 more new hangars at the Shelby County Airport. Dudchock said each time new hangars are built they are “100 percent booked” before they’re even built.

-The county, in partnership with Alabaster, Pelham, Shelby County Sheriff’s Office, Hoover and Chelsea, created Compact 2020. The initiative is a community drug intervention program designed to have a direct interactions with people of all ages, socioeconomic levels, faiths, races and ethnic backgrounds within Shelby County.

“This was started in response to deaths due to drugs,” Dudchock said. “The majority of people in the justice system can be directed to resources that can help them, help mend their families and save their lives.”

Dudchock asked the public to take an active role in making the county safer by anonymously reporting drug activity in their neighborhoods. There are four ways the public can submit an anonymous tip: by mobile phone app, text message, phone call and on the Shelby County District Attorney website.

“We need your eyes,” he said. “We need you to tell people there’s a remedy – that there’s help out there.”

-Tourism throughout the county is also on an upswing, Dudchock said. The 2016 National Junior Olympics Cross-country Championship will be held at Hoover’s Veteran’s Park on Dec. 10. Dudchock said the event will bring 3,000 runners into the county. In 2017, the National Seniors Games will be held at Oak Mountain State Park from June 1-15, 2017. More than 13,000 seniors will compete in the competition.