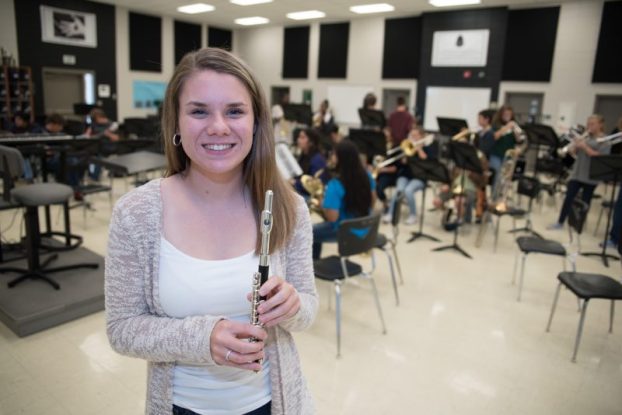 PELHAM – One of Pelham’s own, Katie Mansel, will embark on a journey on Nov. 19 that not many people get to experience.

Mansel, a Pelham High School junior and drum major the school’s Tower of Power marching band, will march in the 90th annual Macy’s Thanksgiving Day Parade playing the piccolo as a part of the Macy’s Great American Marching Band.

From Nov. 19-26, Mansel will be in New York City making memories that will last a lifetime. In addition to having multiple rehearsals to prepare for the parade, the Macy’s band will attend a Broadway show, tour the 9/11 Memorial and visit Times Square.

The band is comprised of 185 select high school instrumentalists and about 40 dancers and color guards from across the United States. The band is under the direction of Auburn University’s Dr. Richard Good, and he will be assisted by music educators from across the country.

The news of Mansel earning a spot in the band came as a surprise to her parents and Pelham High band director Justin Ward. Mansel didn’t tell anyone that she submitted an application to be a part of the band.

“I just wanted to surprise my family for Thanksgiving with a trip to New York City,” Mansel said. “They were all screaming and saying how proud they are of me.”

But Mansel isn’t the first person in her family to achieve such a feat. She follows in the footsteps of her older sister who was selected to march in the Macy’s band playing the clarinet about five or six years ago.

“I just remember her talking about how fun the experience was and I wanted to have that experience too,” Mansel said.

Ward said that he was pleasantly surprised that Mansel took the initiative to apply for the opportunity.

“This encapsulates what we are trying to provide for students – life altering experiences and opportunities inside and outside of Pelham High School,” Ward said, “In this case, she actually provided the experience for herself. She took what she learned here and provided herself with the opportunity.”

It was Mansel’s go-getter attitude and confidence that landed her a spot in Macy’s Great American Marching Band, and it’s also what propelled her to the role of drum major as a sophomore, Ward said.

Even as a 10th grader, Ward said Mansel had a level of confidence that is very difficult to teach.

“Starting the band, stopping the band – a confident and assertive person is needed to do that job,” Ward said.

“I’m nervous to fly to New York by myself, but I’m really excited that I get to represent Alabama,” she said.

Mansel’s mother, sister and grandparents will travel to New York to watch her march in the prestigious parade.