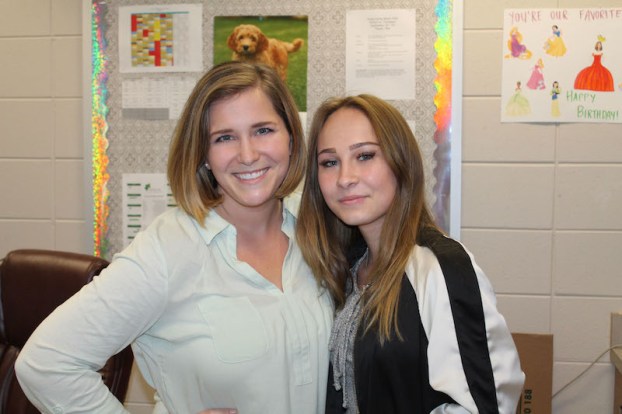 PHS French teacher Courtney Farley and her exchange student Livia Haag are living their adventure together this school year. (Contributed)

Knowing Courtney Farley, I realize that she is always planning her next great adventure. Perhaps Farley’s adventurous side is what makes her French program at PHS so popular. Every day is an adventure with Madame Farley.

Farley explained that her husband’s family was an inspiration.

“Austin and I got interested in hosting a foreign exchange student last spring. His aunt and uncle have hosted three girls so far and are currently hosting their fourth. His parents hosted an exchange student last year. We were able to witness the great experience that both hosts and students had throughout the year. Since we don’t have any children of our own yet, my husband and I thought hosting a foreign student would be a great adventure for us.”

Farley and her husband are hosting Livia Haab from Zurich, Switzerland. In Switzerland, where high school is only three years long, Haab has already graduated. She became an exchange student to work on her English and experience the life of an average American high school student.

“Having this experience, and fluent English, will help me get a better job working in tourism when I return to Switzerland,” said Livia.

“We have loved introducing our country to Livia. We’ve been tubing on the lake, celebrated football parties in the south, and, of course, tried all of the best foods. Livia loves food as much as we do, so she has fit right in to our family. We’re planning a trip to Disney World and the beach. Livia is also really excited to celebrate our holidays.”

Haag has made many new friends at PHS. She has also made the girls soccer team. Adjusting to a larger school, opening a locker and eating lunch in 20 minutes have been some of Haag’s greatest challenges.

“Livia is so brave to come live with strangers in another country and immerse herself in a different language,” said Farley.

Haag has certainly landed with the right family for her American adventure.