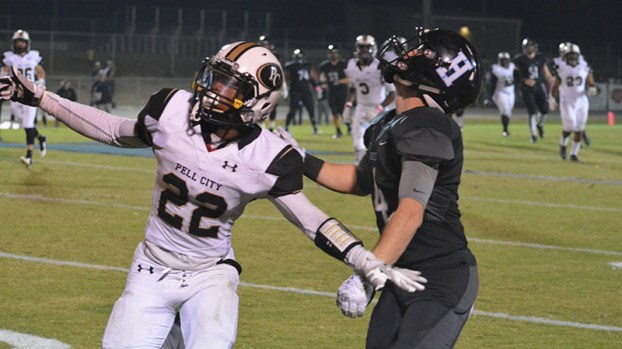 HELENA–The Helena Huskies could not finish out the 2016 season on a high note as the Huskies led for the first 45 minutes of the game before eventually squandering a 14-0 lead to lose a heartbreaker to the Pell City Panthers 20-14 in overtime on Oct. 28.

The Huskies were eliminated from playoff contention a week prior, but Helena was playing for pride with a roster full of seniors on Senior Night at Husky Stadium in the final game of the season.

Helena would get on the board first as Huskies defensive lineman Nick Erwin recovered a Pell City fumble deep in Panthers territory that set up a Devan Walker touchdown run a few plays later to put Helena up 7-0.

The Huskies offense would take advantage of the miss as Helena’s Nash Adams ripped off a 44-yard run to set Helena up at the Panthers 3-yard line. Walker would punch it in on the next play to record his second rushing touchdown of the game to put Helena up 14-0 with 7:45 to go in the first half.

At the end of the first half, Pell City would score a crucial touchdown after the Panthers defense picked off Helena quarterback Riley Davis to get the ball at the Huskies 31-yard line.

With 31 seconds left in the first half, Panthers quarterback Hudson Hughes hit receiver Logan Tucker for a 13-yard touchdown pass to cut Helena’s lead to 14-7 going into halftime.

With 3:48 remaining in the game, Pell City wide receiver Maleek Robinson made an incredible 23-yard touchdown catch while being interfered with to tie the game 14-14.

Helena had one last shot to drive the ball down the field to try and win the game.

Beginning at their own 20-yard line, Davis connected with Huskies wide receiver Jake Busby on a pair of crucial third down completions. The first catch set Helena up at the Panthers 37-yard line.

After getting to the Panthers 25-yard line, the Huskies were flagged for holding to push the ball back to the Panthers 40-yard line and out of field goal range with just 30 seconds remaining in the game.

On third-and-25 Davis completed an 18-yard pass to Busby with 23 seconds left to give Beery a chance for a game winning field goal.

Beery’s attempt from 39-yards out was blocked and after taking over possession, Pell City kneeled the ball to send it to overtime.

Helena got the ball on the first possession in overtime starting at the Pell City 10-yard line.

Helena was flagged for another holding call that pushed the Huskies back to the 32-yard line.

After gaining back some yardage, Helena head coach Watt Parker elected to go for it on fourth-and-goal from the 6-yard line instead of kicking a field goal. The Huskies failed to convert and Pell City needed any sort of score to win the game.

The Panthers would not need a field goal as running back Marquis Posey scored on a 5-yard touchdown run on third down to win the game for Pell City 20-14.

“I’m just real proud of the guys playing their hearts out like we asked them to,” said Parker. “It’s just so disappointing that you have a situation like that. The guys did what we asked them to do and we asked them to play as hard as they could and we felt like they did that. This senior group has been a great group and have been really good leaders for us and done a lot of good things and really laid the foundation over the past two seasons. People forget about how much of an impact this group had in the last two years. I’m just really proud of them as young men and their character and the way they handle themselves and the way they work so hard.”

The loss was Helena’s first overtime loss in program history as the Huskies finished the season with an overall record of 3-7.

Pell City will move on to the 6A playoffs as the No. 4 seed in 6A Region 7 play.