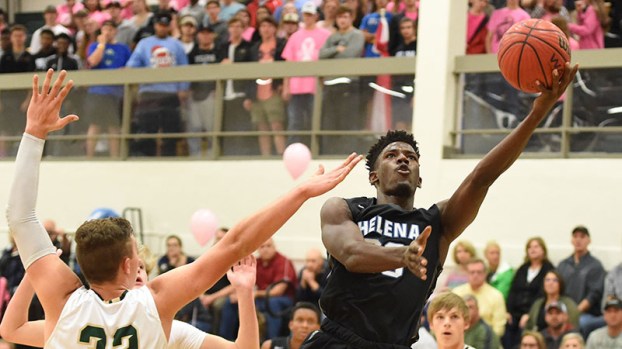 Helena will rely heavily on senior Jon Brown who returns as the Huskies leading scorer after averaging 14 points and 7 rebounds per game last season. (File)

HELENA–The Helena Huskies boys basketball team is just days away from tipping off the 2016-17 season against the Shelby County Wildcats, and things will look pretty different compared to a season ago.

In addition to losing nine players from last year’s team, the Huskies have also moved up from Class 5A to Class 6A Region 8 where they will be competing against rival Pelham and Chelsea.

Helena boys head coach Chris Laatsch is entering his third season as the Huskies head coach and understands his team is in for a challenge with the teams they will face this season.

“Both of those teams were regional teams from a year ago,” Laatsch said referring to Pelham and Chelsea. “Both have good coaches and players and both will be really good again this season. We’re playing nine of our games against 7A teams this season and we’re trying to compete with some of the best teams around to see where we stack up. Basketball is a tournament sport and it’s about trying to learn and compete against different teams. We play a lot of people with a lot of different styles to try to prepare for the playoffs and area tournament.”

Even though the Huskies lost a large portion of their roster from a year ago, Helena returns senior Jon Brown who averaged 14 points and 7 rebounds per game a season ago.

Brown, who committed to play college basketball at the University of North Alabama after graduating from Helena, will be looked upon as one of the senior and offensive leaders of the team this season.

In addition to Brown, the Huskies will look to rely on junior Justin Stuckey on the offensive side of the floor. Stuckey averaged 11 points per game and shot 39 percent from the three-point line a season ago. Stuckey is currently rehabbing a high ankle sprain and bone bruise suffered during football season but should only miss a few games at the beginning of the year.

Seniors Andrew Bush and Cirrahn McFarland will try to bring leadership to the Huskies and Laatsch hopes Colton Hood can help give Helena some presence in the post. Laatsch also said Dionte Tolbert had a fantastic summer and will be the Huskies’ point guard this season.

“We lost nine players off last year’s team so there were lots of open spots to grab,” said Laatsch. “This summer we practiced and prepared with the play dates we did. We went to team camp at Alabama, Samford, Wallace State, Birmingham Southern, Oak Mountain and Gardendale and just played a lot of games. I think we needed to get them in front of quality teams and see who could step up and fill these spots.”

The Huskies first game of the season will be Thursday, Nov. 10 on the road against the Shelby County Wildcats.