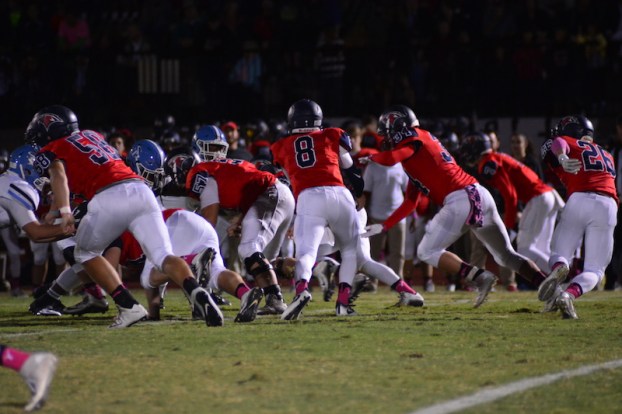 Oak Mountain’s comeback fell short at Hazel Green as they fell to the Trojans 30-28 on Friday, Oct. 28. The Eagles now travel to Hewitt-Trussville to take on the third ranked Huskies in the first round of the playoffs. (File)

HAZEL GREEN – The Oak Mountain Eagles took the two-hour trek up Interstate 65 just north of Huntsville to the city of Hazel Green on Friday night, Oct. 28, to take on the Hazel Green Trojans in an out of class matchup.

The Eagles fought awfully hard in what would be a 30-28 losing effort, but it definitely had to give Cris Bell and his team some confidence heading into next weeks’ first around playoff matchup with Hewitt-Trussville.

“The kids are resilient,” Bell said. “If I would’ve coached as good as they played, we would’ve won that game. I have to do better for them.”

The Eagles would come out and give up an opening drive touchdown to Hazel Green on a 37-yard touchdown pass, but Oak Mountain would answer right back with an opening scoring drive of their own. On first and 10 from the Trojan 20, Eagle’s quarterback Jackson Kimbrell would hit receiver Garrett DeAroujo for his loan reception of the night, a 20-yard touchdown.

The score would remain tied at seven throughout the remainder of the first quarter, but as soon as the second quarter began, the Eagles would score on a short rushing touchdown from Connor Wilson to take a 14-7 lead.

The Trojans, however, would score 20 unanswered points the rest of the quarter to take a 27-14 lead into the half.

This goes back to the fight I was speaking of earlier. Although the Eagles were trailing by 13 they weren’t going to go away lightly, which lead to an exciting second half of football.

Flashing forward to 2:03 left in the third quarter, Connor Webb of Oak Mountain would take a Hazel Green punt 52 yards to the Trojan 17-yard line, setting the Eagles up with great field position.

After a chop block looked to have ended the drive, setting Oak Mountain up with a third and 17 from the 24; quarterback Wyatt Legas found receiver Daniel Salchert for a 24-yard touchdown reception to bring the Eagles within seven at 27-20 as time expired in the third quarter.

Salchert would lead all receivers with 37 yards on four receptions and a touchdown.

Hazel Green would tack on a 25-yard field goal with 8:47 left to put Oak Mountain back in a hole, but the theme of the night was fighting hard and not giving up. The Eagles would eventually get the ball with 3:34 left in the game on their own 25-yard line trailing by 10.

Legas would eventually run in a one-yard touchdown to cap off a quick 75-yard drive leaving 1:21 left on the clock and Oak Mountain trailing 30-28.

The Eagles would recover the ensuing onside kick, showing their resilience yet again and would quickly start driving down the field toward a game winning field goal.

Back-to-back runs of 18 and 12 yards by Legas and running back Luke Percer, respectively, would have Oak Mountain set up in field goal range quickly. After a few more short runs they would get to the Hazel Green 12 setting up a 25-yard kick for Nick Carney.

Unfortunately, as resilient as they played, the kick was no good leading to the 30-28 final.

“We showed what a great group we had in the second half, but I just let them down tonight,” Bell said.

Either way the team played hard, which sets them up nicely going into a matchup with number three ranked Hewitt-Trussville on Friday, Nov. 4, in the first round of the playoffs.

“We have absolutely nothing to lose so we are just going to go out there and play loose,” Bell said. “We have to tackle, we can’t let them get big plays and we have got to convert when we get in the red zone.”

While it may be a tall task to take down one of the better teams in the state, who is putting up 46 points per game, Bell is right in the fact they have nothing to lose and Hewitt-Trussville has everything to lose.

By GRAHAM BROOKS / Staff Writer HELENA–The Helena Huskies could not finish out the 2016 season on a high note... read more