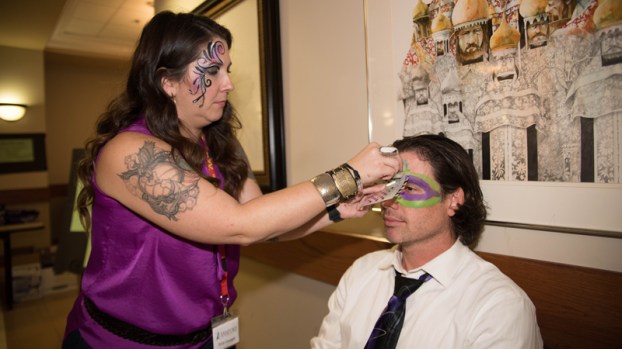 HOOVER – Pioneer Con hosted by the Jefferson State Community College chapter of Sigma Kappa Delta English Honor Society on Oct. 14 could be the start of a new annual tradition.

Faculty and students alike said the event was fun and informative.

SKD sponsor Katie Boyer said she suggested the event during a discussion with other English instructors.

“I was just joking, but they thought it was a really good idea,” Boyer said. “We’re all geeky in an academic and comic book way.”

Pioneer Con also included a roundtable on the literary merits of science fiction, a panel discussion on fantasy writing, displays of student art work, lunch from food truck Neal’s on Wheels, a film screening of John Carpenter’s The Thing, a craft session where participants could create steampunk goggles and a pizza party.

Mary Yahn said discussion about the film was interesting and included thoughts about the work in the context of the 1980s society in which it was created and distributed.

“The movie was a flop,” Yahn said. “It was not successful, but it’s a really good movie.”

Audrey House was one of the participants in the fantasy writing panel.

“The main thing is finding your own inspiration and not being afraid of your own mind and your own ideas,” House said.

Boyer said she was impressed with the participation of faculty members.

“I think the opportunity to present research and your findings locally has been an attraction,” she said.

By BRIANA HARRIS / Staff Writer PELHAM – One of Pelham’s own, Katie Mansel, will embark on a journey on... read more