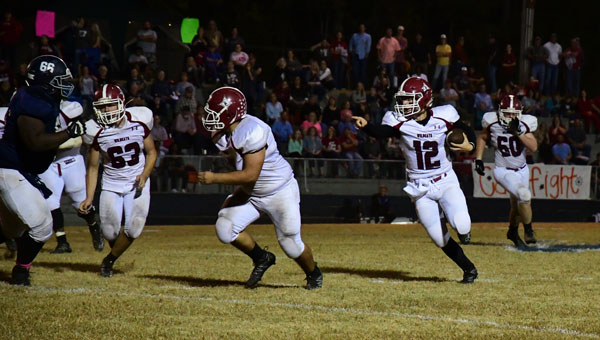 Chadwyn Russ (No. 12) calls a block on a run to the outside Friday night at Jemison.(Photo by Steven Calhoun)

Jemison lost against Shelby County at home with a final score of 42-35.

The Panthers and Wildcats fought it out hard the entire night. Jemison scored first in what would turn out to be a race for the moon between the two teams’ scores.

The Panthers scored the first points with 10:26 left in the first quarter, and the Wildcats answered at 10:15 left in the quarter, leaving the score at 7-7.

Jemison did not waste any time, scoring again as Eric Evans ran in his second touchdown of the night with 7:29 left in the first quarter, putting the Panthers ahead at 14-7.

The Panthers forced Shelby County to give up the ball on downs with 5:11 left in the first quarter and carried possession into the second quarter.

Then, Evans ran an explosive 39-yard run to the 1, and pounded the ball in on the next play to give the Panthers a comfortable lead at 21-7.

After a back-and-forth lasting around seven minutes that included a score by both teams, the clock rested at 35 seconds and Jemison led 28-13.

After the kickoff from Jemison, Shelby County strung together a few key plays, ending with a touchdown run in the last milliseconds of the half.

The Wildcats would carry this momentum back onto the field after the half and score on the opening drive, putting the score at 28-28.

Jemison quickly answered with another touchdown run by Evans. The Panthers led 35-28 with 8:52 in the third.

Then, the Wildcats put their run game into overdrive and scored two touchdowns back to back, ending the third quarter with what would be the final score of the night.

The fourth quarter had plenty of penalties; the two teams combined racked up well over 50 yards worth in just a few minutes of play. With so much effort going into regaining lost yardage, neither team was able to find the end zone.

Shelby County (5-5) kneeled the last few plays as the clock ran out. The final score was 42-35, and the Panthers (3-7) accrued their fourth consecutive home loss.

By NEAL WAGNER / Managing Editor PELHAM – The Pelham Panthers will head into the offseason with some momentum after... read more